Chicago ICC Match Most Expensive City Has Seen in Years

With an average resale price of $127, Wednesday’s ICC match is the most expensive soccer match in Chicago since at least 2010.

The only other Chicago area match since 2010 with average prices above $100 was a July 2011 match between the Chicago Fire and Man Utd that averaged $111.

For American fans of European soccer, Chicago is Paris St. Germain’s most expensive ICC stop in North America, barely beating out their July 25 match in Charlotte against Chelsea FC that averaged $121 on the secondary market. Similarly, Wednesday’s match is Man Utd’s second most expensive North American ICC match: only their July 25 match in Santa Clara against FC Barcelona was more expensive, averaging $226 on the secondary market. 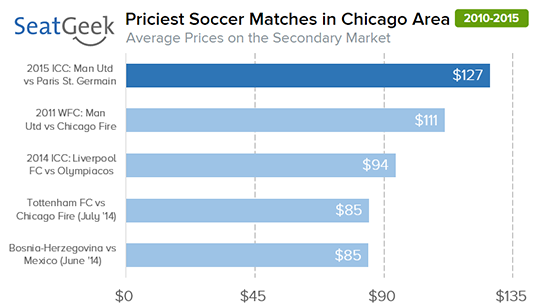 International soccer remains a bigger draw than American soccer, even in America. Including Wednesday’s match, Chicago’s eight most expensive matches in the past six years have involved at least one team from outside the US. The most expensive Chicago area match since 2010 involving two American teams occurred in July 2012, when the Fire hosted the LA Galaxy and tickets averaged $48 — that’s less than half the average price of the Man Utd-Paris St. Germain match.

Even though Wednesday’s match is Chicago’s most popular soccer match in recent history, soccer still doesn’t measure up to the popularity of other major sports. 2015 alone has seen Chicago host 41 sporting events with a higher average ticket resale price than the Man Utd-Paris St. Germain match.