Although both the Jets and Giants lost close matchups this weekend, ticket prices are trending up as they prepare to face off this weekend. The average price for Saturday’s game is now $237.46, up about $5 from Friday. However, the average price for tickets sold through SeatGeek from Saturday to Monday is $266.52, indicating that prices are generally trending up as we near gameday.

Certainly from a week-over-week perspective, averages have also been on the rise. Tickets to the game were averaging $217 in the seven-day period ending Nov. 14, while within the last seven days, the average has stood at $280 – an increase of 29%. 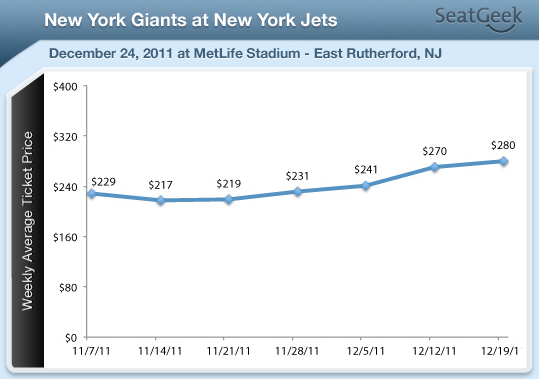 This Saturday’s game is likely to be the 6th most expensive NFL game ever at MetLife Stadium, and the most expensive Jets home game since the stadium opened last year. As of today, average ticket prices are the 3rd highest of any NFL game this weekend, trailing only the Chicago Bears vs. Green Bay Packers ($240.52) and Atlanta Falcons vs. New Orleans Saints ($266.83).

As high as prices are for Jets-Giants, we’ve actually seen more activity for the Giants season finale against the Dallas Cowboys on Jan. 1, 2012. The average price for that game is currently running at $250 and is sharply trending upward, as you can see in this graph: 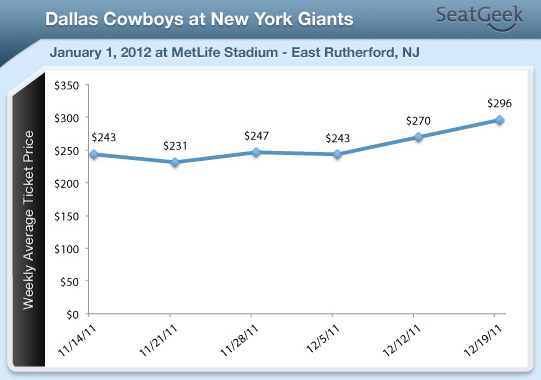 If the Giants can’t get past the Jets this weekend and the Cowboys win, then we expect the market for this Dallas game to collapse. But it’s interesting to see this game so hotly demanded when this weekend’s matchup is the one that very well may determine the Giants’ playoff fate.

How to Get Philadelphia Eagles Season Tickets