Tonight’s Galaxy Match is Most Expensive Ticket Since 2012

With a huge International Champions Cup match on the horizon, tickets to the July 21 match between the LA Galaxy and FC Barcelona are currently averaging $113 on the secondary market, making this the most expensive soccer match in Los Angeles since 2012.

This is more than double the price of the Galaxy’s most expensive regular season home game this year, a match against New York City FC averaging $52. The Galaxy-Barcelona match is the third most expensive Galaxy home match since 2010, behind the MLS Cup game in December 2012 that averaged $142 on the secondary market and the August 2012 match against Real Madrid that averaged $131. Last year’s match against Manchester United, which averaged $109 on the secondary market, was barely cheaper than Tuesday’s Galaxy-Barcelona match. 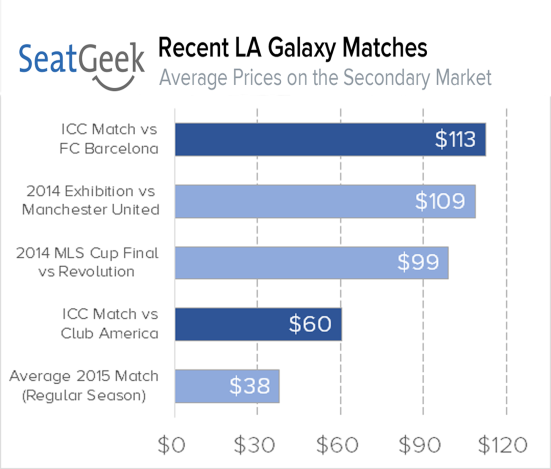 LA Galaxy tickets are averaging $38 on the secondary market this season. This means that soccer fans in Los Angeles could attend three non-exhibition Galaxy games for approximately the same price as the ICC match on July 21. The Galaxy have the ninth highest average ticket resale price in the MLS, and they rank just below the MLS average of $39.

For American fans of European soccer, Los Angeles has the cheapest ticket in the U.S. to see Barcelona play in the International Champions Cup. Their July 25 match against Manchester United in San Francisco is averaging $270 on the secondary market, and their July 28 match against Chelsea FC in Washington, D.C. is averaging $132.

A wide range of prices are available for fans looking to attend Tuesday’s game. Tickets for the first several rows in the middle sideline sections are listed for upwards of $450, while tickets for seats in the last several rows of corner and goal line sections can be had for approximately $100.

While Tuesday’s match is among the most popular soccer matches in LA since 2010, its popularity does not compare to that of American football. Since 2010, 22 football games in LA have had a higher average ticket price. The most expensive of these games was the 2014 Rose Bowl (which served as the National Championship Game), which averaged $1,005 on the secondary market — that’s approximately 9x as expensive as Tuesday’s Galaxy-Barcelona match.