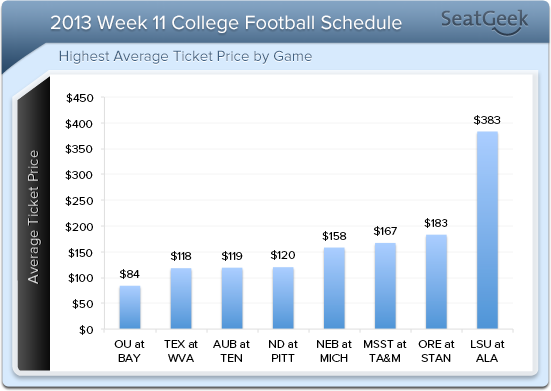 While two of the hotter teams this season – never change, Oregon and Baylor – are looking to steal the spotlight with this week’s Thursday night games, one of the most heated rivalries in recent years will take place this Saturday night in Tuscaloosa when No. 1 Alabama hosts No. 13 LSU. This is the first time since 2008 that both teams aren’t ranked in the BCS top ten (LSU is the odd tiger out on both occasions), but that hasn’t stunted demand for this SEC East matchup.

Each team in the Alabama – LSU rivalry has won two of the last four matchups, with Alabama earning the biggest win in the 2012 BCS National Championship Game rematch after the 2011 “Game of the Century” was won 9-6 by LSU during that same regular season. Bama-bound fans are paying dearly to see this latest rubber match with LSU – Alabama average ticket prices currently at $383; that’s more than double the Oregon vs. Stanford rate of $183! When single-game tickets initially dropped for the 11/9/2013 LSU at Alabama game, they were $90, so the secondary market has inflated them to over four times the regular ticket price.

If you’re determined to land your own LSU – Alabama ticket & see the game first hand, your cheapest way in the door (and way, way up the steps to the upper deck) will run you $165. If you want to roll with the Tide regardless of the price tag, feel free to drop $2,500 to sit on the 50 yard line. While you’re there, try to spy an Alabama faculty or staff member who dropped $2,100 less for season tickets (a total of $324). Excuse them if they’re not impressed by your fat wallet… this isn’t even the most expensive Alabama football game for this season. That would be the 9/14/2013 Alabama at Texas A&M game which saw the Crimson Tide overcome Heisman winner Johnny Manziel to win 49-42. Given A&M’s hype and Alabama’s first visit there as an SEC foe, prices set an all-time college football high at an average of $639.

Before the Alabama at Texas A&M game this season, the top two all-time average ticket prices for SEC games were the last two regular season LSU – Alabama games, with the 2011 “Game of the Century” tickets in Tuscaloosa averaging $504 & last year’s Baton Rouge ticket prices coming in at $462. So, this year’s game is a bit of a letdown if you consider it within the context of its own historic greatness. Everyone other rivalry in the BCS is still trying to catch up. These LSU at Alabama ticket prices are more than twice the second ranked Bama home game for the season (vs Tennessee, $189), and Alabama ticket prices at Bryant-Denny Stadium ($176) rank fifth overall for the season behind A&M ($218), Notre Dame ($196), Ohio State ($195), and LSU ($179).

Rumors are swirling that this could be the last conference matchup between Nick Saban’s precise Alabama machine and Les Miles’s mad Bayou Bengals because Saban could be making an offseason move to the Texas Longhorns. It’s all just speculation now, but it’s yet another reason to savor another great chapter in this classic (and expensive) rivalry. We’ll see you in Tuscaloosa!