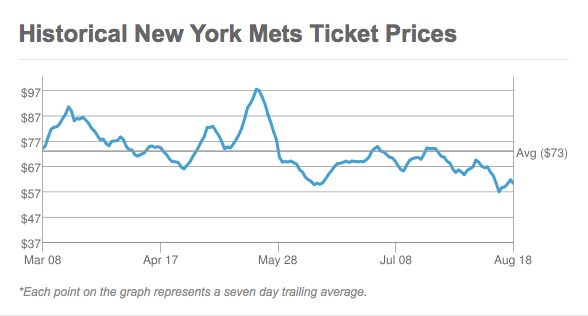 Today we wrote about how the average price for Yankees home game tickets has been falling recently.  The same thing has happened with New York Mets tickets, albeit for different reasons.  The average price for Mets tickets rose quickly in the beginning of the season, then hovered around their season average of $73.  They finished April in the lead of the NL East and that consistency in ticket price can be attributed to their division leading start ( 14-9 at the end of April).

I’d have to speculate that the Mets’ performance directly before and also after the All-Star break is a contributing factor to the decline in average price.  They haven’t left themselves much of a chance to make the post season, and are so inconsistent that the most loyal fans are pulling their hair out (I live with one).  At the All-Star break, the Mets record was 48-40, and they were only trailing the Atlanta Braves by 4 games.  Since then they are 12-20 and 11 games behind the Braves for the NL East lead with a .500 record of 60 wins and 60 losses.  To add insult to injury, they also recently lost their star closer for the season, K-Rod, because of an off-the-field incident. 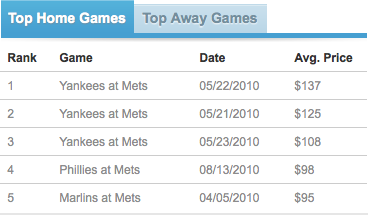 Here at SeatGeek we do the math to save you money, and Mets seats are as affordable as ever.  In fact, the 5 most expensive Mets games already happened! As mentioned above, the subway series tickets during May were the crowning jewel from a price perspective for the Mets. With the way they have been playing, its no surprise that the market has slid as much as it has for these tickets.  Despite all that, its a great time to see a Mets game at a great price, and you can still have Metropolitans of Fun.