In fact, this weekend’s matchup between the two Big Ten schools is currently the fourth most expensive regular season game in college football this season.

Ohio has had an abundance of major sporting events in the year 2015, including three NBA Finals games, the MLB All Star Game and Home Run Derby, and the NHL All Star Game. Here is how this weekend’s games compare to those: 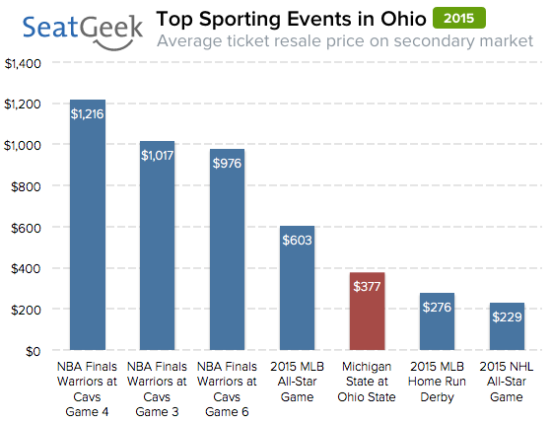 Fans who have waited until now to buy tickets may be able to save a bit of money. The median listing price for the Ohio State-Michigan State game was $465 a month ago, but is currently $360, a drop of 23 percent. The get-in price (or cheapest ticket) has gone from $264 to $180 over the same timespan.

Interestingly, the Ohio State-Michigan State matchup is the fourth most expensive regular season college football game this year, but not even the most expensive game of this weekend. That distinction belongs to the Notre Dame-Boston College game at Fenway Park Saturday, which currently has an average resale price of $637.