Baseball is in full swing and in just a few weeks the 2019 season will hit its midway point. This means fans will be treated to another Midsummer Classic. The new voting format is already underway, so make sure to get your votes in for your favorite players. It won’t be long before the festivities begin, so let’s take a look at what you need to know leading up to the exciting game.

When and Where is the 2019 MLB All-Star Game

This year’s All-Star celebration will take place at Progressive Field in Cleveland, Ohio. A fantastic five days’ worth of events gets underway on Friday, July 5 at the Huntington Conventional Center of Cleveland and The Malls. Here, fans will have access to Play Ball Park, the largest indoor/outdoor baseball interactive them park on the planet.

Sunday, July 7 will feature a doubleheader of events starting with the MLB All-Star Celebrity Softball Game, followed by the SiriusXM All-Star Futures Game featuring the top Minor League prospects around.

Monday, July 8 will feature the latest iteration of the T-Mobile Home Run Derby, an event that you surely won’t want to miss.

But everything leads up to the 90th annual MLB All-Star game on July 9, 2019 at Progressive Field, home of the Cleveland Indians.

Featuring a seating capacity of 34,788, Cleveland’s Progressive Field has plenty of fantastic viewing angles that will surely offer you a great look at the All-Star Game. You can find a complete photo gallery of seat views from around the stadium on SeatGeek, and check out the seating chart below. 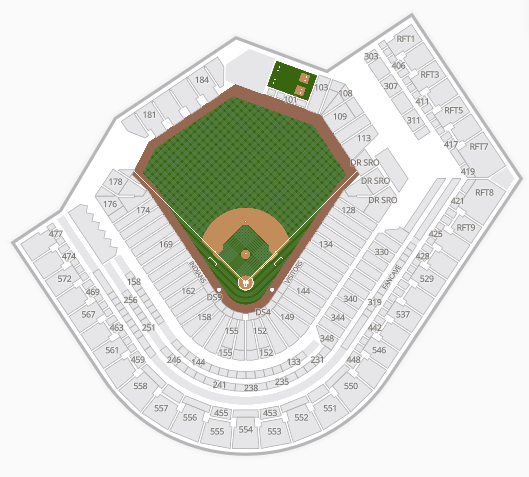 For tickets to the All-Star Game or any of the weekend’s festivities, head to SeatGeek to find every available ticket option. Use code TBA10MLB at checkout to save $10 off your purchase of $50 or more. Browse tickets here or view select options below.

Since voting has just gotten underway, there’s no way to know exactly who will make the rosters for the American League and National League. Still, that doesn’t mean we can’t make some way-too-early predictions.

Houston’s George Springer will likely be voted in as a starter. The outfielder has hit well all year and should continue to do so, as long as he’s not hampered by injury. Currently, he’s batting .308 with 43 RBIs and 17 homers.

The Chicago White Sox may be under .500, but shortstop Tim Anderson has been one of the most exciting players in baseball this season. Currently, he leads the AL with a .337 batting average. He has 26 RBIs and eight homers – not the flashy numbers that some of his AL counterparts have, but he’s an undeniable star and should make the All-Star roster.

In terms of pitching, starter Justin Verlander will likely make his eighth All-Star Game appearance this year. He’s 8-2 in 12 starts for the Astros and has an impressive 2.38 ERA. He’s also quickly approaching 100 strikeouts and will surely have surpassed that milestone come July 9.

Without a doubt, a shoo-in to make the roster – likely as a starter – is the Dodgers’ Cody Bellinger. Through two months, Bellinger leads the major in multiple batting categories. He has 74 hits, 20 homers, and is batting a brilliant .378 with 52 RBIs. He’s been the best player for one of the best teams in the MLB.

We should certainly expect to see the current NL home run leader in the starting lineup. Christian Yelich has been a huge part of the Milwaukee Brewers’ success. Through his first two months, he’s batting .314 with 21 homers and 44 RBIs.

On the pitching side, Hyun-Jin Ryu will likely take the mound first for the NL as long as his brilliant pitching continues throughout June. As of this writing, he’s 7-1 with a 1.65 ERA for the Dodgers. With 62 strikeouts, he’s been virtually unhittable at times.