Although Major League Soccer didn’t get a team into this year’s installment of the International Champions Cup, the 2014 MLS All-Star Game will give the top players of America’s league a chance to mix it up with one of the best European clubs of the decade. FC Bayern Munich features 14 players from this summer’s World Cup, and many members of their squad played key roles in Germany’s recent victory in Brazil. The MLS squad has seven players who participated in World Cup, so it will be far from a pushover for the reigning Club World Cup and Bundesliga champions.

The teams will meet Wednesday, August 6, in Providence Park, home pitch of the Portland Timbers of MLS. The game catches both teams at different times in their respective league schedules; the MLS is beginning its push toward the playoffs while Bayern Munich is treating this game as a pre-season friendly before their national league starts its 2014-15 season. It’s proving to be a perfect storm in the Pacific Northwest, with World Cup fever, European competition and playoff hype mixing to turn this annual exhibition into an event with record-setting ticket demand.

Fans have so far paid an average of $224 for a ticket on the secondary market, making Wednesday night’s game the most expensive soccer match played on US soil since at least 2009 when we began monitoring ticket prices (and by our estimates, likely since the 1994 World Cup Final at the Rose Bowl). Prior to this game, the highest average ticket price we’d seen for a match in the US was $202 for the 2011 MLS All-Star Game at Red Bull Arena, which featured Manchester United.

The MLS All-Star Game is also more than twice as expensive as any prior event held at Providence Park. For the second leg of the Western Conference Championship last November against Real Salt Lake, fans paid an average of $106 per ticket. The only other sporting event in Portland that has drawn higher prices on the resale market since 2009 was Game 6 of the Trail Blazers‘ playoff series against the Houston Rockets earlier this year ($249 average/ticket). 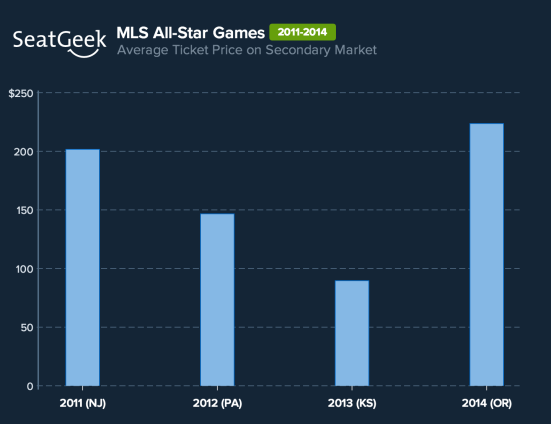 Demand is also way up this year in comparison to the 2013 MLS All-Star Game at Sporting Park in Kansas City. That match featuring AS Roma drew an average ticket price of only $90, the lowest we’ve recorded for the All-Star Game since 2009. Back in 2012 at PPL Park outside Philadelphia, the average price paid for a ticket on the secondary market was $147 to see the All-Stars play Chelsea.

In comparison to face values, tickets for tomorrow’s game are going for 3-4x on the secondary market. Seats in the North End Terrace (Sections 202-211), which cost $45-$55 at face value, start at $158 on the resale market. Lower sideline tickets initially went for $100, but they’re now going for $354 on average. The most expensive seats of all, located in the KeyBank Club at midfield (originally $200/ticket), have fetched an average price of $524; for front-row seats in the KeyBank Club, we’ve seen some fans spend more than $800 per ticket. As of noon yesterday, fewer than 400 tickets were available on the secondary market; the cheapest seats started at $158 each in the very last row of Section 202.

Top 5 Moments of the MLS Season (So Far)