Here at SeatGeek, we wanted to take one more look back at the ticketing phenomenon that was this year’s NBA Finals between the Miami Heat and the Oklahoma City Thunder. We also wanted to take a look at what exactly the Miami Heat brass and players spent that $200K Championship After-Party Bar Tab on, and what they (or you) could have purchased instead. Here’s what we found: 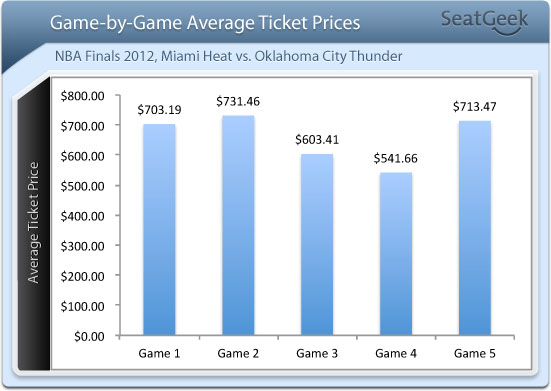 [Interested in other basketball tickets? Check out our NBA tickets page or post on the upcoming USA Basketball Exhibitions.] 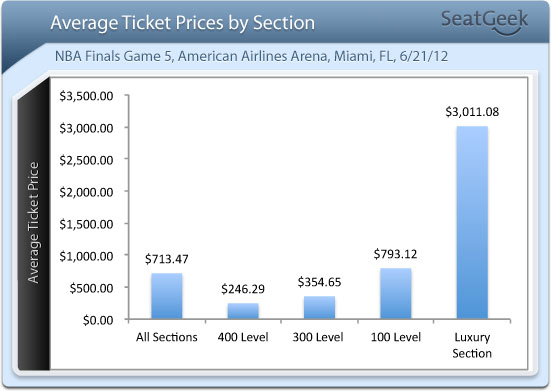 • Seats for Game 5 also varied a lot by section. The cheapest, upper level 400 seats (which included some standing room only seats) went for an average of $246.29. The next level down, the 300 level went for an average of $354.64. Once we got down to the lower 100 court level is where we really saw an increase in ticket prices. Tickets here sold for an average of $793.12. Lastly, luxury section seats (the Dewar’s Club and Flagship Lounge) went for $3,011.08 on average.

• Lastly, as was documented by many news outlets, the Heat enjoyed a pretty expensive championship after-party at Club LIV in Miami. The players and their entourage racked up a stunning $200,000 bar tab. Included in this tab, was a $75,000 15L Ace of Spades bottle of champagne. For this single bottle of alcohol, 375 tickets could have been purchased in the 400 Level for the clinching Game 5.

• Players also shot hand-held CO2 powered spray guns (retail price $1,695), during the party, as shown here in this picture of Juwan Howard. As an alternative to the high-powered guns (which some would argue are a bit excessive), one could have purchased 10 standing room only seats or the cheapest luxury section seats. When we turn our attention to Lebron James’ after-party wardrobe, we find that you could have bought a seat in the front row of the 300 level as an alternative to $395 YSL (Yves Saint Laurents) logo belt, or been 1/3 of your way towards the cheapest standing room only ticket for the monetary equivalent of his $50 3X MVP Beast T-Shirt which portrayed him as a big cat.

What You Could Have Gotten Instead 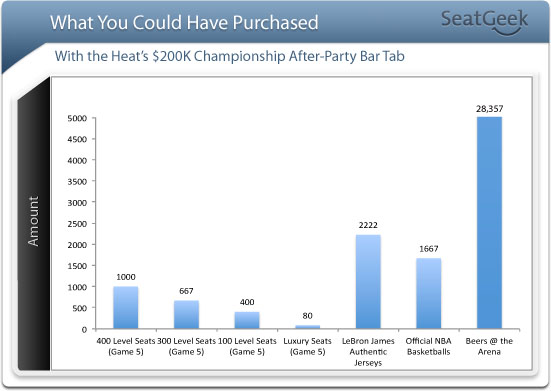 Images courtesy of Footbasket, The Score, and Sports Grid.