Here at SeatGeek we are as excited as you are about the release of the 2010-2011 NBA schedule. In fact, it’s got us itching for basketball already. So to appease our appetite for hoops we’ve taken a good hard look at the day when pro basketball returns to our lives, and begins another season full of high-flying Wade-to-Lebron alley-ooping goodness.

The 2010-2011 NBA season officially begins on October 26th, with three games that should peak the interest of even the most casual of basketball fans. The most hyped of the three is clearly the matchup between Miami and the Celtics, as the new (and improved?) Heat take their traveling roadshow up to Boston to face off against Pierce, Rondo, and the Celtics newest big man, Shaq. The other two matchups are nothing to scoff at either however, as the defending champion Lakers host Yao and the Houston Rockets, and Steve Nash and the Suns travel to Portland to battle the Trail Blazers.

At SeatGeek we’re all about saving you money on sports and concert tickets. With that in mind, we’ve compiled a list of average listing prices of every NBA team’s first home game of the season. Keep reading to see how your home team stacks up. 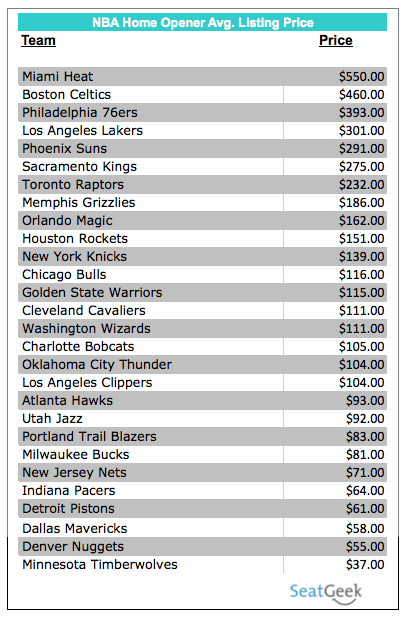 Note: The New Orleans Hornets, and the San Antonio Spurs have been omitted from this list. This is due to the fact that the number of tickets listed was too limited to give an accurate depiction the ticket market for those games. As the season draws nearer, and more tickets are placed on the market, we will gain a more concrete idea of what the true average listing price for those teams are.

It most likely comes as no surprise that three of the four most expensive home openers are for the Celtics and Lakers, both of whom made the NBA finals last season, and the Miami Heat, who acquired Chris Bosh and Lebron James this offseason. Here is another look at the top ten most expensive opening games. 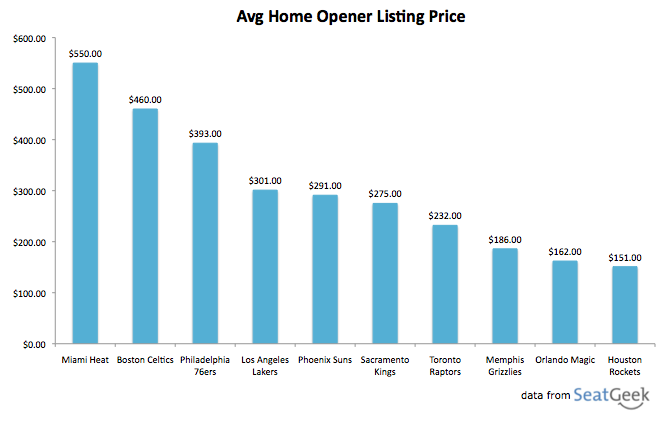 Although the majority of ticket sellers list their tickets at reasonable prices, with the hopes of selling the tickets for an appropriate sum, certain games have tickets listed at exorbitant prices that pull the average price for the game well out of proportion. Here are the top ten most expensive ticket listings. 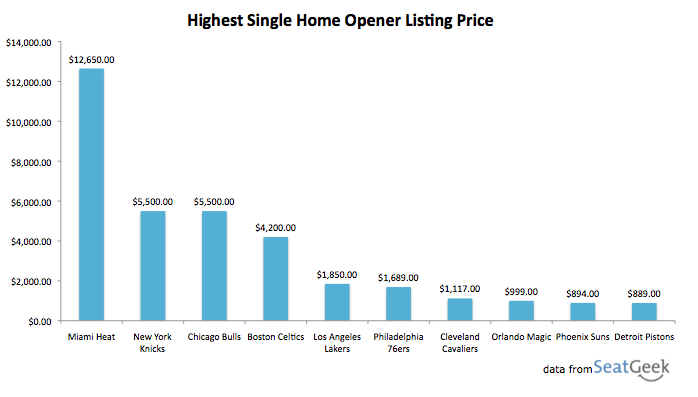 Unsurprisingly, the Heat have by far the highest single listing price, with one seller trying to sell his/her tickets at $12,650 a piece. Most likely those tickets will not sell at that much of a premium, however, it only takes one buyer desperate enough to see Wade, Bosh and King James together for those tickets to move. Other teams with extreme ticket listings include the Knicks and Bulls, who each have tickets listed at $5,500 each.

If you are interested in attending the Heat’s opening game extravaganza, or the home opener of any other team, you can find the great NBA tickets, and even sold out tickets, on SeatGeek.