Which Modern NBA Superstar Has The Biggest Impact on Ticket Prices?

Now that a new NBA champion has been crowned, it’s time to move onto the next tradition in the NBA calendar: The Offseason

And with that comes a dizzying array of trades, signings, speculation and tension.

So while we are on this topic of player movement, we decided to raise a question: which prolific player, that has been traded/acquired within the past few years, has had the biggest impact on his new team NOT in terms of the increase in number of games won year-over-year but rather how much ticket prices have risen as a result of his arrival. After all, this could be a metric used to estimate a player’s “excitement factor” – that is how much marginal enthusiasm he is able to generate in fans such that they are willing to shell out more for tickets.

Since discovering trends in the secondary ticket market is our speciality here at SeatGeek, we are able to use our proprietary data to provide an answer this question.

Below, we have compiled six of the biggest blockbuster trades/acquisitions that have occurred in the last few years (in descending order of occurrence):

The following chart below then presents the average ticket prices for each player’s new team, before and after his arrival: 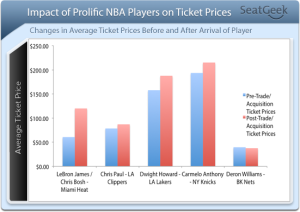 As expected, all of these stars had a strong positive impact on the value of their new team’s ticket prices (negative on our wallets, mind you), with the exception of Deron Williams. To provide a little more depth on the numbers behind these impacts, consider the graph below:

A few observations that can be extracted from this data:

It is noted that the 98% increase in Heat ticket prices were attributable to the arrival of two prime players and not one, making the Miami Heat variable biased relative to the rest. Therefore, to isolate the values of LeBron and Bosh individually, we compare the ticket prices for their respective previous team before and after their departure: 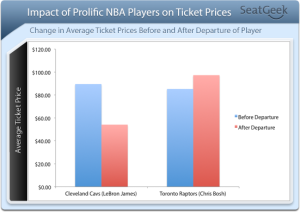 The evidence is stark: LeBron’s absence caused Cavalier tickets to devalue by almost 30% whereas Bosh’s departure left Raptors tickets at a higher value. Taking this insight into account, it is clear which superstar was the driving factor behind the surge in Heat ticket prices.

Well there it is folks: out of the six candidates we analyzed, these three superstars have the biggest impact on the value of ticket prices (warning: the results are not much of a shocker):

What do you think – Do you agree with our ticketing data in reflecting the “excitement factor” of these basketball superstars? We’d love to hear your opinion.