NBA versus NHL Ticket Price Comparison in the Northeast 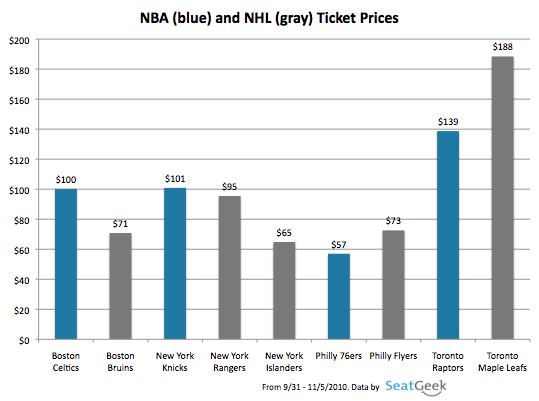 Head to SeatGeek.com to get NHL tickets! And learn how to find the lowest Stanley Cup Ticket prices via our industry leading tracking of NHL ticket prices.

As the NBA and NHL launch into the 2010-2011 season, SeatGeek would like to see how they compare in the ticket price department. NBA is unquestionably a higher profile sport: more coverage, more stars, more seats, more points. But we investigated fall ticket prices (9/31-11/05) in both leagues for Boston, New York, Philadelphia, and Toronto, and found that they are actually quite close.

As you can see, it’s a toss-up. In Boston and New York, basketball will cost you more. The Celtics, with seventeen NBA titles to boast about, easily take the Bruins, and the Knicks sport higher prices than the Rangers or the Islanders, but then again the Islanders and the Rangers have to compete for fans. In Toronto and Philly, hockey takes the cake. This may not come as a surprise in hockey’s home territory Toronto, where Maple Leaf seats run 36% higher than Raptors’, but the Flyers tickets soar an almost comparable 27% above the 76ers.

A weighted average of ticket prices by sales in these four cities, however, reveals that NBA is more expensive overall. 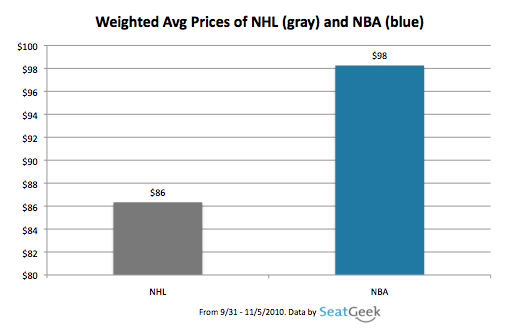