Texas Longhorns fans have their finger on the panic button heading into Saturday’s Red River Shootout game against Oklahoma. But what might be even more of a long shot than beating the Sooners this weekend for the UT faithful is trying to resell their tickets for face value.

The annual Texas-Oklahoma rivalry game is played at the Cotton Bowl on the Texas state fairgrounds in Dallas, with fans split 50-50 right down the middle of the stadium. Based on SeatGeek data, ticket prices on the Texas side are nearly 40 percent cheaper than on the Oklahoma side, by far the largest gap we’ve seen between the two since 2010. For the first time, some Texas tickets are actually selling for less than face value ($110) on the secondary market.

In the GIF below, you can see a heat map of the Cotton Bowl showing how ticket prices for this game have shifted year-over-year since 2010.

Here are some more numbers that tell the tale of hard times in Austin: 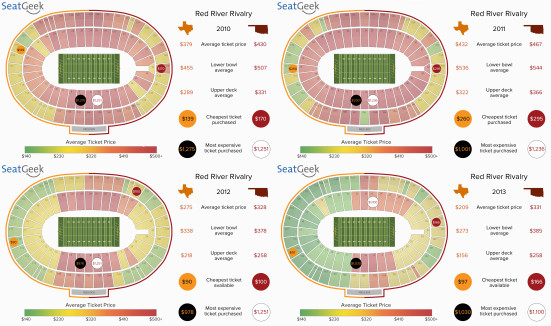