Since the release of the Rutgers Scarlet Knights football schedule, there has been insane fluctuation in prices within the secondary market. The home schedule has a distinct interest gap between the top three programs paying a visit to High Point Solutions Stadium, and the bottom four teams. Ohio State is drawing the most interest, with an average resale price of $185.

The most expensive out-of-conference game is when they host Kansas, and the average ticket is reselling for $29. A visit from Maryland is the only Big Ten game that doesn’t see an average price of at least $80. Tickets to that game are reselling for just an average of $28. See the graphic below for the average resale price and get-in price (cheapest ticket) for each of Rutgers seven home games.


Currently the game against Ohio State will be Rutgers most expensive home game since at least 2010, when we started tracking the secondary market. The average resale price of $185 is significantly higher than the current most expensive game, last year’s visit by Penn State. That game had an average resale price of $147. Of course with the Ohio State game still months away the price of a ticket could drop significantly depending on how the season is going for the Scarlet Knights and Buckeyes. 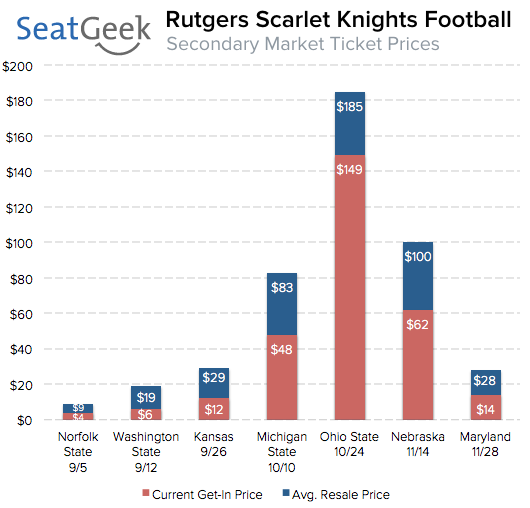 The most expensive place to see Rutgers this year outside of New Jersey is in State College when the Scarlet Knights visit Penn State. Tickets for that early season matchup are reselling for an average of $122. That’s more than all of the Rutgers home games except for the Ohio State matchup.

We currently have a pair of seats in the second row of Section 109 listed for $6 each for the Norfolk State game. These exact same seats are listed for $217 for the Ohio State game, 36 times the price of the Norfolk tickets.