Occurring every two years, the Ryder Cup alternates between golf courses in the U.S. and Europe as it is a competition for teams from both the U.S. and Europe. This upcoming weekend, the 28th through the 30th of September, Chicago plays host to the tournament.

The average resale price for an all-week pass to the Ryder Cup is $908. That price makes Ryder Cup tickets the second most expensive for any sporting event in Chicago since 2009 (when SeatGeek started collecting data). The only Chicago sporting event to outrank the price of a full week Ryder Cup badge was Game 5 of the 2010 Stanley Cup Finals, for which tickets averaged $1,035. The current average cost of a full-week Ryder Cup badge currently exceeds that of Games 1 and 2 of the 2010 Stanley Cup Finals (average price of $745 and $696, respectively), as well as other major recent events like the Packers-Bears NFC Title game in January 2011 (average price of $688).

Even when unbundled down to just daily grounds passes, Ryder Cup tickets are extremely pricey. The average cost of a grounds pass for any of the 3 competition days (Friday-Sunday) is $293. Tickets to Sunday’s singles rounds are cheapest of any of the 3 days (average price of $264), while Friday tickets are the most expensive of the 3 days at an average price of $310. Right now, the cheapest available grounds pass on the secondary market for any of these days is a $180 pass for Sunday’s session.

As compared to other major golf tournaments, only Masters tickets outrank the Ryder Cup in terms of resale prices and demand. The average price of a Masters 4-day badge this year was a whopping $2986 — largely a factor of Augusta National’s small size and limited ticket distribution.

That said, Ryder Cup tickets will cost fans far more than comparable tickets to see the US Open in recent years. By comparison, the average price of a full week ticket to this year’s US Open at the Olympic Club in San Francisco was $538, while a full week badge to the 2010 US Open at Congressional Country Club in Bethesda, MD was $430.

Great Value in Practice Round Tickets

For fans looking to see at least some great golf action, the best value can be found in attending the Ryder Cup practice rounds today thru Thursday. Daily grounds passes to the practice rounds have sold for an average of $24, $30 and $99 for Tuesday, Wednesday and Thursday daily passes, respectively. The latest info on prices and availability for Ryder Cup badges can be found SeatGeek’s Ryder Cup page here – https://seatgeek.com/ryder-cup-tickets/ 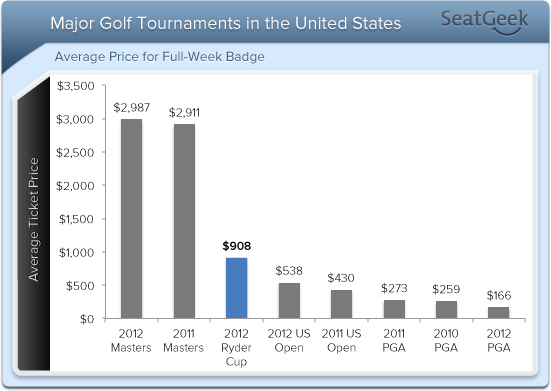