While the St. Louis – Chicago rivalry often finds fuel in the spring thanks to the Cardinals and Cubs starting their respective baseball seasons, this year gets a second dose from the NHL’s Western Conference playoffs. The No. 2 seed St. Louis Blues and No. 3 Chicago Blackhawks will face off in the inaugural Central Division Semifinal, pairing the free-falling Blues and rebounding Hawks in a matchup of two teams heavily favored at various points this season to represent the West in the Stanley Cup Finals.

Now, thanks to injuries to key Blackhawks Jonathon Toews and Patrick Kane and a six-game losing streak to conclude the regular season for the Blues, it’s anybody’s game. The Blackhawks have the pedigree of two Cups in four seasons, while the Blues have the All Star goalie for whom they traded in March and size throughout their roster with the potential to shut down even potent lineups like Chicago. The Blues’ hopes were once flying high, but it looks like their deflated performance in March and the return of excitement regarding the Cardinals seems to have quieted interest in seeing the Blues pursue their first Western Conference Final since 2001. 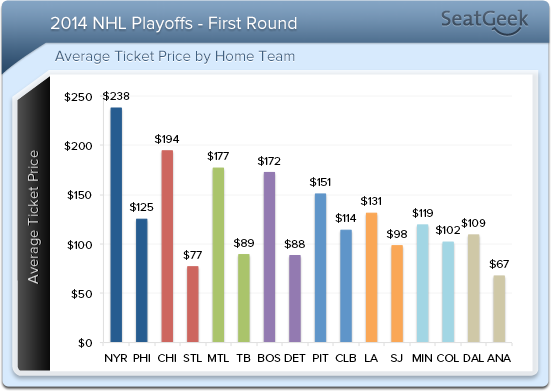 The average price of a ticket to the Blues’ Central Division Semifinal home games against the Blackhawks is $76.88, making St. Louis the second-cheapest NHL playoff city this year; only tickets to the Ducks-Stars series in Anaheim ($67.47 average ticket price) are less expensive. The Blues’ first-round home games this year are actually slightly more expensive than last year’s against the Kings, which were the cheapest in the NHL at an average ticket price of $66.52.

The 15.6% bump in average price this year can be attributed in part to the added interest that comes with a big-name opponent like the Blackhawks. The most expensive Blues home game this season actually came against Chicago back on Saturday, Dec. 28 ($144.24 average ticket price), and the Blackhawks drew the highest ticket prices on the road of any NHL team this year at an average of $115.04 per ticket.

Blues first-round playoff tickets are the second-cheapest on the secondary market behind only the Anaheim Ducks. Interestingly enough, tickets for Blues-Hawks games in Chicago are going for $194.42 on average — more than 2.5x the average cost of a ticket in St. Louis! Given the proximity of the two cities, we’re also seeing an unusually high level of interest from Blackhawks fans for tickets to the games in STL. So far, 35% of Game 1 ticket shoppers have come from the Chicago metro area. The $117.54 difference in average ticket price between the games in St. Louis and Chicago is the largest such gap among this year’s eight first-round series.