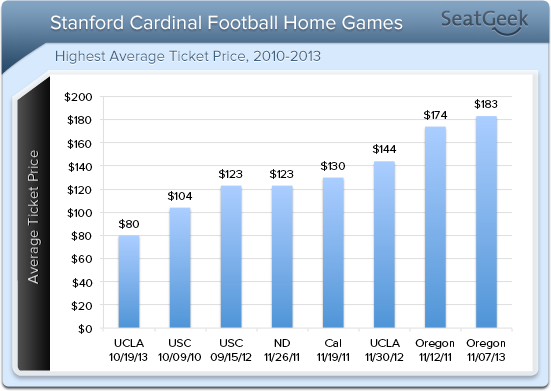 You know what’s cheap? Going to a Stanford men’s soccer game. It costs $8 for general admission, or – if you feel like impressing someone – you could shell out $17 for a reserved seat. Get ’em while they’re hot, folks.

You know what’s not cheap? Going to a Stanford football game. Yeah, those puppies will set you back, especially Thursday against Oregon. See, for Thursday, it’s that same $8 you’d spend on a men’s soccer game plus about $175. So yeah, it’s going to run you roughly $183. Maybe you can get hotdogs for $8?

But all is not lost. Right now on SeatGeek, standing room tickets to Oregon-Stanford start at $88 each, and the cheapest actual seats available are listed at $28 per ticket in Section 238. True, on the high end, we’ve seen fans pay as much as $895 per ticket for seats on the 50-yard line, but don’t worry your pretty little head about those guys. You’ll see plenty well with the men’s soccer team fans in the $28 section.

And now for some history. The only other Stanford home game to draw an average ticket price of at least $150 came the last time the Ducks visited the Cardinal on November 12, 2011. That game drew an average resale price of $174 per ticket.

So how does this game compare to others in college football? Turns out, the only other college football game this week with a higher average ticket price than Oregon-Stanford is LSU-Alabama at $383. And for a Pac-12 game, this one’s up there with the priciest ever. Thursday’s game ranks as the fifth-most expensive Pac-12 conference game ever behind the the 2010, ’12 and ’13 editions of the Civil War between Oregon and Oregon State ($205, $189 and $195 average resale prices, respectively) as well as last year’s USC-Utah game ($190 per ticket). Yeah, it’s safe to say this game’s kind of a big deal.