Summer Olympics 2012: A Cost Breakdown of This Summer’s Most Anticipated Events

Every four years, spectators across the world tune into the Summer Olympic Games to follow their favorite athletes as they embark on the quest for gold. This summer will be no different when tonight’s marquee opening ceremony officially kicks off the 2012 olympic season, setting the tone for the next 17 days. There has been a lot of hype leading up to this this year’s ceremony, and many have wondered whether or not England will be able to pull off a spectacle like China did in 2008. Regardless of whether London delivers, this is one of the most highly-anticipated events in the world, as evidenced by extremely high ticket prices on the resale market.

Face value tickets to the much-anticipated Opening Ceremony ranged, fittingly, between £20.12 at the low end and £2,012 for top tier, “Category AA” tickets ($31.57 and $3,157 in USD). That’s a lot of money for anyone, but it’s a comparative steal when matched up against what fans have paid on secondary markets. The average resale price for an Opening Ceremony ticket is a whopping $2,550, and with the tickets we tracked bearing an average face value of $1,470, tickets on average have sold for 73% over their already lofty face values.

The single most expensive ticket price paid for any Olympics tickets in our dataset was $4000 per ticket for “Category B” seats to the Opening Ceremony — nearly $2,500 over face value of $1,524. 16 of the 17 highest priced tickets recorded in our analysis were for the Opening Ceremony, leading us to confidently say that Friday’s event will be the hottest ticket of London 2012.

In general, we’ve seen the most ticket demand for the following sports – Swimming, Track and Field, Men’s Basketball and Tennis. 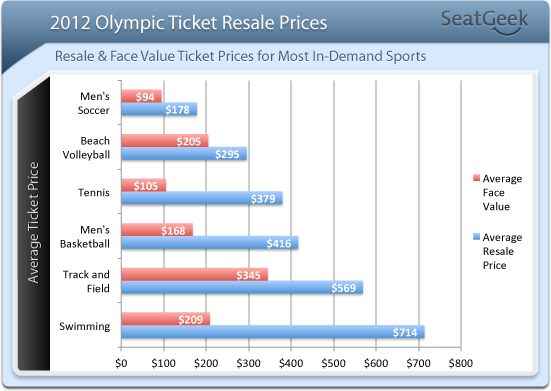 As for the actual athletic competitions, here are a few of the hottest tickets we’ve seen in our analysis, with the star-studded events (think those featuring Usain Bolt, Ryan Lochte and LeBron James) leading the pack: