Can you believe that the Super Bowl is less than two months away? Us either. And for the third time in the sport’s history, the kind people of Arizona will play host for the massive event. While we’re not sure yet what two teams will make it to the University of Phoenix Stadium, we do know that Katy Perry will perform the half-time show. So, that’s pretty cool.

For those looking to attend the game, getting your hands on tickets may seem nearly impossible. Key word: nearly. Read on to find out how to secure yourself a seat on February 1.

How do I get Super Bowl tickets?

That leaves 25.2% for the league itself, most of which is provided to sponsors and media. However, within this percentage consists a drawing that allows fans to purchase Super Bowl tickets at face value. Fans had between February and June to apply for the right to purchase Super Bowl XLIX tickets, and should have been notified by now of the lottery results. For most fans that didn’t win the drawing (or didn’t participate), that leaves the secondary market as the only viable way to attend the Super Bowl.

How much do Super Bowl XLIX tickets cost on the secondary market?

Generally speaking, Super Bowl tickets cost between $2500 and $3000 on average, but that price varies depending on the matchup and time of purchase. Last season, the Seahawks-Broncos matchup averaged $2536 on the resale market. Tickets for Super Bowl XLVII between the Ravens and 49ers went for $2478, and the Giants-Patriots rematch averaged $2993. Out of the past four Super Bowl games, the Packers-Steelers game had the highest average price on the secondary market at $3561.

The price of Super Bowl tickets typically falls as the event nears. However, once the matchup is finally determined, there is a significant shift in the resale market as prices can jump up or down depending on the teams. Last season, fears about cold weather caused prices to decline steadily once the two teams advanced. Super Bowl XLVII followed a similar curve, although prices didn’t decline as rapidly in New Orleans to see Ray Lewis’ last game. Three seasons ago, ticket prices increased for the Giants-Patriots rematch before ultimately falling off. The only Super Bowl in the last four seasons that has not suffered a serious decline before the start of the game is Super Bowl XLV, when the Packers defeated the Steelers. This game featured two of the league’s top fan bases, and Pittsburgh improbably advanced as a Wild Card team.

How do tickets for this season compare to previous years?

As of right now, ticket prices are at their lowest point in the past five seasons.

Although tickets are by no means cheap with an average price of $2915, tickets are actually down 26% compared to this time last season, when tickets averaged $3955 on the resale market. However, some of this can also be attributed to having New York as the host city (and with this much time before the actual game, New Yorkers weren’t as concerned about the cold-weather conditions). At this time two years ago for Super Bowl XLVII in New Orleans, tickets were going for $3155 on the resale market. Three seasons ago, ticket prices averaged $3179 for Super Bowl XLVI in Indianapolis. On this date in 2011, tickets for Super Bowl XLV in Dallas were going for $2935.

However, with so much uncertainty as to what the matchup will be in Arizona, more fans are buying Super Bowl tickets. While prices have declined relative to other seasons, the quantity of tickets purchased is at its highest point in five seasons.

This season, more than 1,000 Super Bowl tickets have already been exchanged on the secondary market. On this date last season, only a few hundred tickets had sold on the resale market for Super Bowl XLVIII. 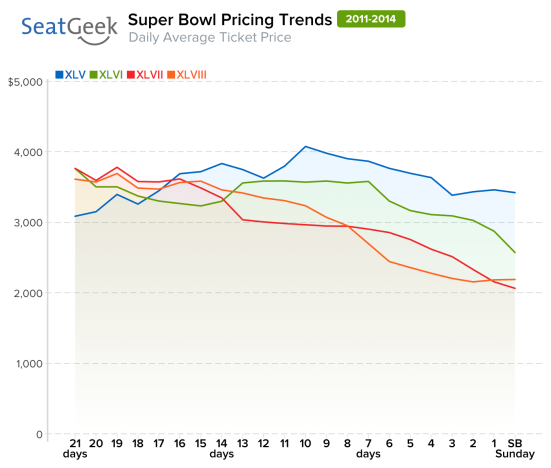 In stark contrast to our Super Bowl data, ticket price trends for the College Football Playoffs show a spike in ticket sales as game day approaches: 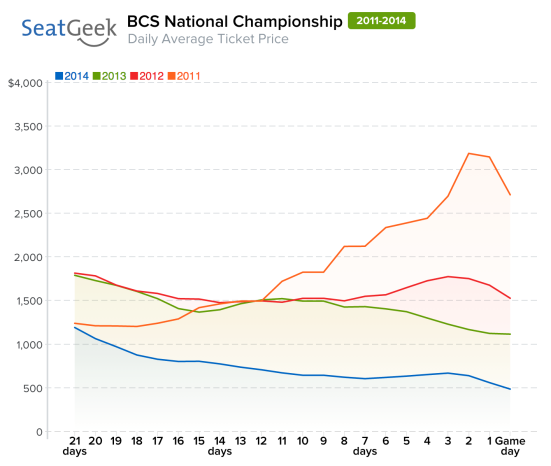