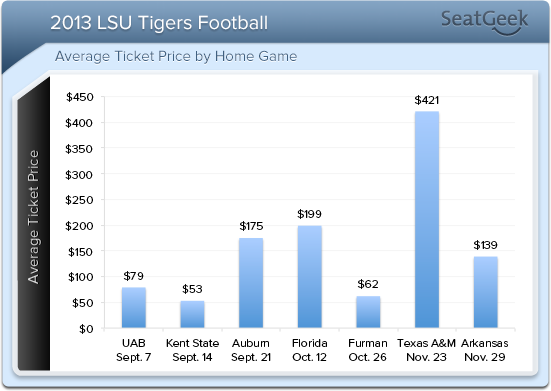 Can Johnny Football keep his Heisman-repeat hopes alive? Is LSU still relevant in the SEC with Alabama, Auburn, and A&M currently in charge? LSU fans seem to think so, and are putting their money where their mouths are to find out. At an average resale price of $421 per ticket, Saturday’s A&M-LSU game is by far the most in-demand LSU home game this season (see graph below). In fact, the only Tigers home game in the last five years to draw a higher average ticket price was last year’s Alabama game at $462.

Saturday’s game in Baton Rouge is also the second-most in-demand game of the college football season behind only the Alabama-A&M game in College Station earlier this year. That game drew an average resale price of $639 per ticket and was the most expensive regular season game we’ve seen since we began monitoring the secondary ticket market in 2009. Uh huh, it’s kind of a big deal.

How big a deal? This big: LSU sold individual game tickets for Saturday’s game against A&M for $70 each, meaning that Aggies-Tigers tickets are being resold on the secondary market for six times face value on average. No other college football game this weekend comes close to matching the demand for A&M-LSU; Indiana-Ohio State is the second-most expensive ticket on Saturday at $158, or 38% of the cost of an average ticket to A&M-LSU.

Right now, the cheapest ticket pair of tickets available for Saturday’s game are listed at $175 apiece in the upper deck, but we’ve seen some fans spend as much as $2,500 per ticket for lower-level seats at the 50-yard line. Upper-level tickets have gone for $245 each on average, while lower-level sideline tickets have sold for well over $700 apiece. Sure, yeah, I’ll spend $2,500 for a ticket to a college football game. No biggy.