This week, Ray Rice was suspended for the first two games of the season by commissioner Roger Goodell following his offseason arrest for domestic violence.

Much criticism has followed, with a consensus forming that the suspension was far too lenient, especially in comparison with the relatively harsh penalties levied for steroid use and other drug offences.

To emphasize just how big of a problem this is, Michael Powell’s New York Times piece reminds us of the numerous other incidents of violence (domestic and otherwise) that Roger Goodell has had to deal with during his tenure as league commissioner. From Ben Roethlisberger’s alleged sexual assaults to Aaron Hernandez’s indictment for murder, “On and on it goes,” says Powell.

The first answer to this question comes from a 1999 paper in Chance, which found that black and white NFL players are arrested for violent crimes at about half the rate of the general population (of similarly aged males).

Of course, violent crime has decreased considerably in America over the last 15 years, so let’s have a look at recent data.

The FBI’s 2012 UCR provides data on assault arrests separately by race and by age:

By assuming that the age and race effects are independent, we can estimate the rates for black and white 25-29 year olds (the average age of NFL players is within this range).

So again, we find that NFL players are arrested for assault at a considerably lower rate than the rest of us: 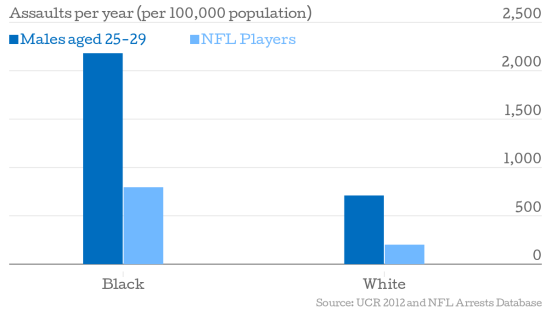 Assault is always to be condemned, but perhaps an adjustment of our expectations is in order. Simply put, if arrests are any indication, NFL players are three times less violent (off-field) than the population as a whole.