The Ultimate Guide to Super Bowl 2020

Although New England Patriots fans are still basking in the afterglow of Super Bowl 53, it’s never too early to start planning for next year’s Big Game.

Whether it’s your first time attending the Super Bowl or your fiftieth, traveling out of town for one of the hottest tickets in sports raises a lot of questions. Luckily, we have the answers.

Here’s everything you need to know about getting to, attending and enjoying the big game.

How to Buy Super Bowl Tickets

Acquiring Super Bowl tickets, at least face value ones, is no easy task. But it’s not impossible! Let’s break it down.

Season ticket holders are automatically entered into a lottery for their chance to buy primary SB tickets. But not every season ticket holder is equal: preference is given to those whose team has made it to the Super Bowl, the number and type of seats you own, and how long you’ve owned said seats. For the lucky chosen few, you can pick up your tickets on game day at the box office.

For People in the NFL

The NFL distributes 74.8% of Super Bowl tickets to their teams. The remaining 25.2% of tickets are then spread out between the media, partners and sponsors. Only a small amount are then sold to fans via “packages” which are mostly scooped up by ticket brokers well in advance of the game (which then trickles down to you, the buyer). In essence, it’s almost impossible for the Average Joe to get a Super Bowl ticket from a primary source. For the 2017 Super Bowl and going forward, the NFL announced that they were allocating 6,000 tickets away from the participating teams and instead funneling them into more Super Bowl packages. Those packages will be sold to fans via the NFL On Location Experience Company.

On the Secondary Market

SeatGeek lists secondary tickets (as well as primary for select markets), including Super Bowl inventory. Leading up to Super Bowl LI we outlined all the features available on SeatGeek to help you save money and purchase tickets confidently. Some of these include our ticket price tracker, Deal Score, and a ticket guarantee. SeatGeek also has seat views of the Mercedes-Benz Stadium on its venue page, so customers can check out where they’re sitting before making a purchase.

While we won’t know exactly how Super Bowl ticket prices will shake out for a long time, if this year’s ticket price average ($5,073) is any indication, it might start trending ever-so-slightly downward. Although prices for the main event have been climbing since 2014–save for Super Bowl LI in 2017 when it dropped to $3,976–this year’s event averaged out to be $300 cheaper than the year prior.

Where Will Super Bowl 2020 Take Place?

Super Bowl 54 will be held on Sunday, February 2 at Florida’s Hard Rock Stadium. Located just north of Miami in a city called Miami Gardens, the stadium has played host to the NFL’s Miami Dolphins since it opened back on August 16, 1987. It’s also home to the Miami Hurricanes, the NCAA’s Orange Bowl, and will host professional tennis’ Miami Open this year for the first time.

Below, you’ll find the seating chart layout for football games, but if you’re curious about other sports and concert seating maps, you can head here. Are you wondering what the view looks like from where you’ll be sitting? We have that, too! Check out our venue photo gallery that shows you every angle of Hard Rock Stadium. 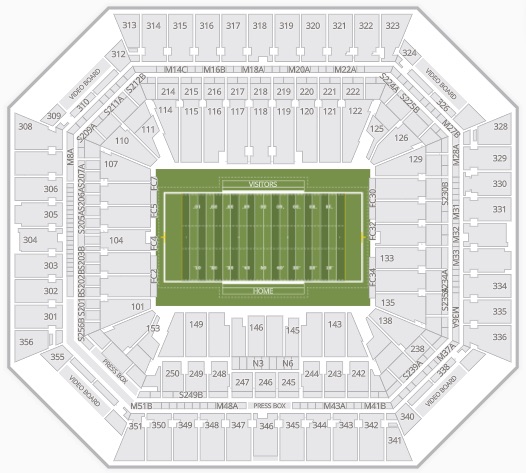 Hard Rock Stadium was designed to accommodate as many football fans as possible while still providing good viewing angles for everyone. Typically, the stadium holds 65,326 fans for football games. This includes 34,736 upper ring seats, 27,397 lower rings seats, and nearly 3,200 VIP seats in 193 skyboxes.

Getting to Hard Rock Stadium

Located just north of Miami, there are plenty of safe and easy ways to get to Hard Rock Stadium for the Super Bowl. Here are the most convenient, popular options.

Driving to the Stadium

If you plan on driving to Hard Rock Stadium, there are plenty of spots available. The parking around the stadium spans 140 acres and features 24,137 cars.

Hard Rock Stadium has also partnered with the SunPass program, which offers fans a convenient and cheaper option for parking payment at Miami Dolphins games. If enrolled in the program, you can save $15 by using SunPass to park at the stadium.

While you’ll have quite a walk if you’re looking for parking away from the stadium, SpotHero can help you find inexpensive spots throughout the city. Available on desktop and mobile devices, it uses an interactive map to compare parking spot prices.

You can find a full route map here and you can also download the Transit Tracker app when you’re ready to start planning.

When departing Hard Rock Stadium, you can utilize the available express shuttles. These shuttles depart from stadium Lot 14 and cost $10 (cash or credit) per person.

You can always use Uber or Lyft for transportation near the stadium. Designated ride-share drop-off points include Norwood Elementary (19810 NW 14th Ct.) and will leave you with a 20-minute walk. You can also get dropped off at Lester Brown Park (19405 NW 32nd Ave.) and have a 30-minute walk to Hard Rock.

Where to Eat & Drink Around Hard Rock Stadium

Finding the ideal spot to eat and drink pre-or-post-game is essential to your Super Bowl 54 experience. Here are some of the best restaurants and bars near the venue.

Nothing beats a delicious slice of pizza and that’s exactly what you’ll find at this long-standing Italian spot. View the menu

Lovelys On the Go

This takeout seafood spot is ideal for pre-game eats. If you’re in the mood for a shrimp poe boy or lobster & waffles, you’ll want to head here. View the menu

Head here for more delicious dining options in the area.

Where to Stay Around Hard Rock Stadium

Thanks to websites like AirBnB and HotelTonight, it’s quick and easy to find the perfect accommodations when traveling to Miami for the Super Bowl. But if you’re looking to stay close to Hard Rock Stadium, here are some of your best options.

If your goal is to stay as close to Hard Rock Stadium as possible, you’ll want to book your room at the Stadium Hotel. Located just one mile from the venue, the hotel even offers a shuttle to and from the stadium for $15 round trip. Book Now

For stunning views of the city as well as a sleek, modern hotel experience, the AC Hotel is an ideal spot for Super Bowl week. Book Now

One of the Miami area’s newest hotels, Circ Hotel offers spacious rooms, a wide array of amenities, and even a rooftop pool featuring beautiful views of the cityscape. Book Now

Just six miles from the stadium, you’ll find Aloft. This modern hotel is in the heart of Aventura, offering you plenty of nearby attractions and nightlife options. Book Now

Can I Bring My Bag into the Stadium?
The following bags are stadium approved: one clear plastic, vinyl, or PVC bag that doesn’t exceed 12” by 6” by 12” OR a one-gallon clear plastic freezer bag. Small clutch bags and purses the size of a hand are also allowed. Diapers and wipes can be carried in these clear bags (size exceptions will be made for medically necessary items after proper inspection at Gate E).

Can I Bring My Camera?
Guests may bring still-photo and video cameras to capture moments at Hard Rock Stadium. However, camera lenses should extend no longer than 6”. Guests are not permitted to bring in GoPro cameras or selfie sticks.

Can I Bring My Animal to the Stadium?
Animals are NOT permitted in Hard Rock Stadium. However, service animals are allowed if necessary.

Does My Child Get in Free?
All children ages 2 and older must have valid tickets with them at all times.

Can I Bring My Banner, Sign, or Flag?
Guests are welcome to display hand-held banners or signs during the game. But the stadium reserves the right to remove any banner/sign that contains derogatory comments, profanity, or commercial content. Also, if it impedes another guest’s view or blocks stadium equipment/signage/décor, it will be removed.

While the main upcoming attraction will be Super Bowl 54, Hard Rock Stadium will be hosting some fantastic events throughout the year leading up to the game. Check out the venue’s upcoming events below. (Head here for a full list)