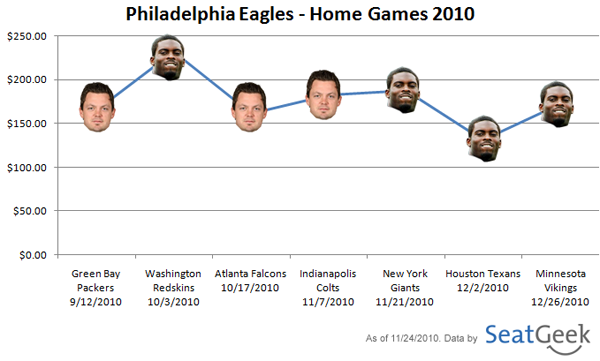 The Philadelphia Eagles got off to a rocky start of the 2010 season. Both Andy Reid and fans were unsure who would lead the team as starting quarterback, Kevin Kolb or Michael Vick. The home opener against the Green Bay Packers ended in disaster with Kolb injured and Vick stepping in to save the day. Still the game ended in a 27-20 loss to the Packers superior offense.

The next home game was one of the most anticipated of the season, when former Eagles quarterback Donovan McNabb came to take on the Eagles at Lincoln Financial Field. Michael Vick started the game, but was soon lost to a chest injury. David Akers came through with a kick that helped the Eagles fight back, as well as a touchdown from Kevin Kolb. Andy Reid went on to start Kolb at the two following home games against the Atlanta Falcons and Indianapolis Colts.

After an incredible performance by Vick on the road at the Washington Redskins, it looks like the quarterback is here to stay. Still, it’s a bit too early to tell if ticket prices will be affected by Vick. We’ll continue to monitor to see how he is impacting demand as the season continues.

Let us know how you feel about Vick’s surprising return to the NFL in the comments or on Twitter @SeatGeek.