With only five weeks left in the 2014 college football regular season, the Alabama Crimson Tide find themselves in a strange spot: looking up at anyone in the polls, let alone two teams in their own division. Counting the Tide, the SEC West currently has three teams in the top 6 for entry into the inaugural College Football Playoff, with No. 5 Alabama currently sitting as the “first team out” behind No. 1 Mississippi State and No. 3 Auburn (plus No. 2 Florida State and No. 4 Oregon, if you dare look outside of the SEC). Luckily for Bama, they’ll be given an opportunity to unseat both SEC squads with regular season matchups in the coming weeks, but they should be wary of looking past their opponent this week.

Alabama travels to Baton Rouge this weekend, better known as Death Valley when your trip involves opposing the LSU Tigers. These two teams squared off in some epic battles over the past few seasons, one of which included an all-SEC BCS National Championship Game after the 2011 season. Bama coach Nick Saban and LSU’s Les Miles continue to build stout defensive squads bolstered by power running games, so expect this rivalry’s trademark toughness to rule the day. But Saban’s offense is packing new wrinkles via coordinator Lane Kiffin and exciting receiver Amari Cooper, so there’s potential for fireworks under the Louisiana lights… and explosive rivalries in the SEC aren’t cheap to catch in person.

Fans have so far paid an average of $367 for a ticket to Alabama-LSU in Baton Rouge this weekend, making it the 4th-most in-demand game of the college football season. Only Auburn-Alabama ($435 average ticket price) in Tuscaloosa, Michigan-Ohio State ($406) in Columbus and Michigan-Notre Dame ($393) in South Bend have been pricier tickets this year. The cheapest pair of tickets on the secondary market for Alabama-LSU is listed at $203 per ticket in Section 658 of the upper deck. To put that in perspective, only 13 other college football games this season will draw an average ticket price above $200. 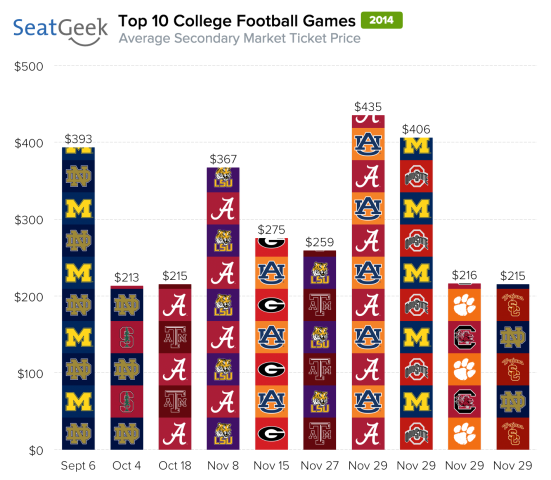 Tickets for Saturday’s game are going for nearly twice as much as the next-most expensive game of the year in Baton Rouge, which was the Ole Miss game two weekends ago ($192 average ticket price). Fans paid $177 per ticket to see the home opener against Wisconsin on Aug. 30, and tickets for the Mississippi State game resold for an average of $100 each (less than a third of the average cost of this Alabama game).

Compared to recent Alabama-LSU games, ticket prices for this one match up closely with last year’s game in Tuscaloosa and the 2010 game in Baton Rouge, which both drew average ticket prices of $362. The 2011 “Game of the Century” at Alabama is the most expensive regular season game either team has ever played ($504), followed by the 2012 game the two played at LSU ($462).

Single-game face values for tickets to Saturday’s game ranged from $100 in the upper deck to $150 in the lower level. A student season ticket package for all seven LSU home games, which ranged from $84 for general admission to $126 for a reserved seat, costs about one-third of the average resale price for this single Alabama game.