While the 2014 National League Championship Series is being regarded as somewhat villainous – the Giants and Cardinals now have a combined seven LCS appearances in the last five seasons – the latest installment of the ALCS has two perpetual underdogs guaranteed to break one of the two longest World Series droughts in American League history. The Baltimore Orioles (31 years) and Kansas City Royals (29 years) swept their Division Series opponents, but neither necessarily displayed wire-to-wire dominance in their respective three wins. Strong defense, timely hitting and reliable bullpens have ushered both squads this far, and the O’s and Royals fan bases are understandably excited for their chances to witness history; when you know three decades could pass before your team’s on the brink of a championship berth, you’ll pay dearly to see it with your own eyes.

At an average ticket price of $285, Games 1 and 2 in Baltimore this weekend are among the most in-demand League Championship Series games in either league since at least the 2010 season when we began tracking ticket prices. In fact, the only city in which prices have been higher for LCS games during that time is Kansas City, where fans have paid an average of $348 per ticket for a seat to Games 3-5 of this same series. For reference, tickets to last year’s ALCS games at Fenway Park, annually the most expensive ballpark in MLB, resold for an average of $236.

Of course, ticket prices vary depending on where you’re trying to sit in Camden Yards. Looking at the average resale price of tickets by seating tier, we’ve found that Field Box seats (Sections 16-58) are reselling for $454 apiece, more than double the single-game ALCS face value price of $225. Lower Reserve seats, originally priced between $90-$110, are reselling for $236 each on average. The cheapest seats in the ballpark in the Left Field Upper Reserve are going for $180 on the secondary market, more than two and a half times their face value of $70; even standing room tickets, originally priced at $40, are starting at $125 on the secondary market for Game 1. 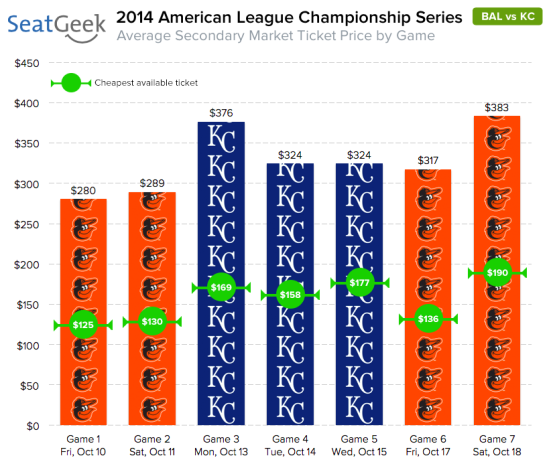 To put the price of Orioles ALCS tickets in further perspective, seats for Games 1 and 2 of the ALDS against the Tigers this season resold for $147 on average. That falls between the average resale price for Opening Day the past two years, which was $174 for this year’s opener against the Boston Red Sox and $140 in 2013 against the Minnesota Twins. If the O’s-Royals series comes back to Baltimore for a Game 6, prices will be even higher, particularly if the Orioles lead 3-2 and have an opportunity to clinch a World Series berth in that game. The average resale price on the secondary market for Game 6 is currently $317, with standing room tickets starting at $136. A potential Game 7 is currently drawing an average price of $383 per ticket, and the cheapest ticket available is listed at $190.

Over in the National League, tickets for Games 1 and 2 of the NLCS in St. Louis are reselling for just $164 on average, more than $100 lower than the $267 per-ticket average for Games 3-5 in San Francisco. It seems that fatigue is setting in this year in the market for Cardinals NLCS tickets; the team has been there four straight seasons, and a trip to the NLCS now seems like a ho-hum event in St. Louis, even for the “Best Fans in Baseball.” While the Giants are pursuing their third World Series crown in five seasons, their years out of the playoffs completely have still left fans witht he ability to appreciate these deep playoff runs.

5 Tips: How To Get Cheap Kansas City Royals Tickets