Blackhawks at Capitals for 2015 Winter Classic

Most everything in the NHL is hot right now. The Stanley Cup is spending the offseason in southern California after the Los Angeles Kings‘ title run, and the first pick of this year’s draft is chilling on South Beach with the Florida Panthers. And now that the Game of Thrones season is over too, leave it to hockey to remind us all that winter is coming and it’s bringing another classic outdoor game to ring in the new year. The 2015 NHL Winter Classic will feature the Chicago Blackhawks visiting the Washington Capitals somewhere in the nation’s capitol, though it’s still TBA whether the game will take place at Nationals Park (the current front runner), or a football stadium like FedEx Field or RFK Stadium.

Having a MLB park leading the pack does not bode well for fans hoping to score cheap tickets. Nationals Park can hold 41,418 fans -less than half of FedEx Field’s capacity of 85,000 – which means there would be less supply and higher prices on the resale market. For the last Winter Classic held at a baseball stadium (Citizens Bank Park in Philadelphia in 2012), the average price paid for a seat on the secondary market was $471, nearly double the combined average ticket price of the 2011 and 2014 games held at football stadiums ($245).

An average ticket for the 2011 Winter Classic featuring the Penguins and Capitals at Heinz Field (capacity of 68,111) cost fans an average of $409 on the secondary market, and there were a total of about 11,000 tickets resold. The 2012 game we mentioned featured the Rangers against the Flyers (with 46,967 seats), and the average price of a ticket rose 15% to $471; there were also more tickets resold (approximately 13,000). The next Winter Classic in 2014 featured a long-anticipated matchup between the Red Wings and Maple Leafs at the Big House, Michigan Stadium, which welcomed a record 105,491 fans, and that increased supply of tickets (an estimated 24,000 were resold on secondary markets) helped bring the average resale price down to $172.

The NHL’s use of the outdoor game event has evolved over the years. The most recent season featured five other outdoor games: the Heritage Classic in Canada and four games in the United States collectively called the “Stadium Series,” all in addition to the Leafs-Wings Winter Classic we mentioned. The first Stadium Series game took place at Dodgers Stadium in Los Angeles, where the average ticket cost $190. The Rangers then played twice at Yankee Stadium — first against the Devils ($231) and second against the Islanders ($141). The fourth game was between the Penguins and Blackhawks at Soldier Field in Chicago ($248). The 2011 Heritage Classic featured the Flames and Canadiens at McMahon Stadium in Calgary ($253), and the 2014 game had the Canucks against the Senators at BC Place in Vancouver ($153).

By taking a look at pricing trends for the past three Winter Classic games, we’ve found that the best time to buy a ticket has been a little less than a week before the game. In 2011, the average ticket price bottomed out at $343 five days before the game, having fallen 24% in 17 days from a peak of $450. Prices for the 2012 game followed a similar pattern, dipping to a low of $391 six days before the drop of the puck (down 22% from $500 with two weeks to go before the game). Last season, the average price fell continuously throughout December, dropping 57% from $239 with 30 days to go before the game to just $103 per ticket the night before. Granted, this year’s dropoff could’ve been abnormally large due to so many tickets and such harsh weather in Michigan. 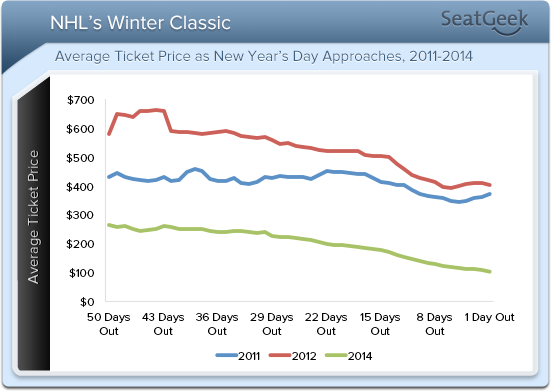 The 2015 Winter Classic should end up being a record-breaking home game for the Capitals in terms of demand. Since 2010, the most in-demand regular season home game for the Caps was on February 6, 2011, against Pittsburgh, when fans spent an average of $166 per ticket on the secondary market. Even in the playoffs, the highest average ticket price we’ve recorded for a Caps game at the Verizon Center is $221 for Game 4 of the 2012 Eastern Conference Semifinals against the Rangers. The Capitals have only hosted the Blackhawks once since we began collecting pricing data, and that came on April 11 earlier this year. The average ticket to that game at the Verizon Center cost $122 on the resale market. It’ll be interesting to see how the demand for this chapter of the NHL’s premiere regular-season event develops following a full, exciting season that provided fans the chance to see their favorite teams from the Eastern and Western conferences facing off during the regular season.

The 2018 NHL Winter Classic: Everything You Need to Know