It’s been a rough few years for the Buffalo Bills, but a week one victory on the road in Chicago has given fans hope that 2014 could be the years when their team finally circles the wagons and returns to the playoffs. EJ Manual, CJ Spiller, Fred Jackson and Robert Woods pace an explosive, maturing offense that’s hoping to lead a charge out of the AFC East basement and into the postseason. With the division-rival Miami Dolphins heading north for the Bills’ home opener also holding a 1-0 record, Buffalo is looking to take an early step toward supremacy with an early-season winning streak.

Fans are pumped, especially with this week’s added bonus that a new local ownership group will win the bidding for the franchise, and they’re ready to flood the gates of Ralph Wilson Stadium. With tickets starting at $183 and a median price of $259, this is by far the most expensive Bills tickets have ever been the week before a regular season home game. Since Monday, the price of the cheapest available ticket on the market has jumped $77 and 72% from $106 to $183, and the median listing price has risen $61 and 30% from $198 to $259. Prior to this game, the highest prices we’d seen the week before a Bills home game were for the September 30, 2012, game against the Patriots, when the cheapest available ticket was listed for $97 on Thursday and the median price was $194. 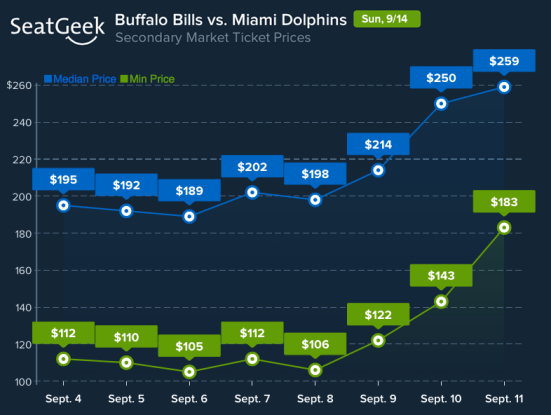 With the surge in prices this week, Bills-Dolphins now has the highest starting price of any NFL game in Week 2, ahead of the $165 it would cost you to buy the cheapest ticket on the market for the opening game at Levi’s Stadium between the 49ers and Bears. It’s now $70+ more expensive to get a ticket at Ralph Wilson Stadium on Sunday than for any of the next three most in-demand games of the weekend: Chargers-Seahawks ($113), Packers-Jets ($101) and Broncos-Chiefs ($96). The jump in price has happened in conjunction with a huge drop in the availability of tickets, as the number of seats up for resale has fallen 75% from 4,526 to 1,143 tickets in the past week. Ralph Wilson holds nearly 74,000 at capacity, meaning only 1.5% of the seats in the stadium are currently listed on the secondary market.

How to Get Buffalo Bills Season Tickets