Alabama opens its SEC schedule against Florida this weekend in Tuscaloosa, and both teams have showed enough offensive spark in the preceding games to breathe some extra life into demand for this matchup of two cornerstone institutions in the conference.

Alabama has dominated the SEC West for much of the last decade, but they showed flashes of mortality last year in defeats at the hands of Auburn and Oklahoma. Armed with new offensive coordinator Lane Kiffin, Nick Saban’s team has three straight games of over 500 yards, adding yet another dimension to their always-formidable running game and stout defense. Florida has shown glimpses of life compared to their dismal 2013, but their defense gave up 30 points last weekend against Kentucky, so… things could get ugly on the Crimson Tide’s home turf.

Still, demand for tickets to the Florida game this year is down considerably from a few seasons ago, largely because of the Gators’ poor play in recent years. Back in 2010 when No. 7 Florida came to Tuscaloosa to play No. 1 Alabama, tickets resold for an average of $337 each; by comparison, the average ticket price this year is down $117 (35%). Coming into Saturday’s game, Florida is unranked, and it’s been six years since they last won the SEC championship (2008).

Perhaps because of the lower-than-usual prices for this Florida game, we’ve seen an increased number of Florida fans buying tickets on the secondary market compared to years past. About 20% of ticket shoppers on SeatGeek are coming from Florida; we normally see about 10% from a visiting fan base for a game like this. Alabama accounts for 40% of ticket shoppers, followed by bordering states Georgia (10%), Tennessee (8%) and Louisiana (4%). 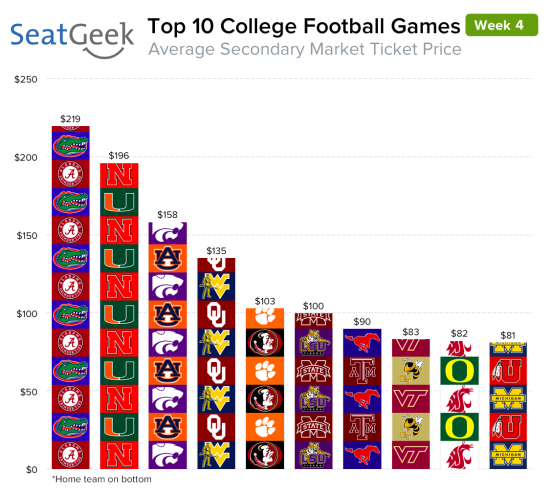 So far, the average price paid for a ticket on the secondary market to Florida-Alabama is $219, and the cheapest seat available is listed at $97. That makes this game the most in-demand game of the weekend in college football by average ticket price ahead of Miami-Nebraska ($196), Auburn-Kansas State ($158) and Oklahoma-West Virginia ($135). Right now, there are about 3,700 Florida-Alabama tickets left on the secondary market with a starting price of $97. A premium ticket in the lower level behind the Alabama bench, however, is going for no less than $300. No tickets are available from the school as the game is sold out, but the original face-value price on tickets to this game was $85.

This weekend’s game is the 3rd-most expensive ticket on Alabama’s home schedule. The average price for Texas A&M‘s visit to Bryant-Denny Stadium is currently $256 per ticket, and seats for the Iron Bowl against Auburn on November 29 are going for an average of $453 each. Tickets for the A&M game start at $165 on the resale market, and the cheapest seat for the Iron Bowl is listed at $249.