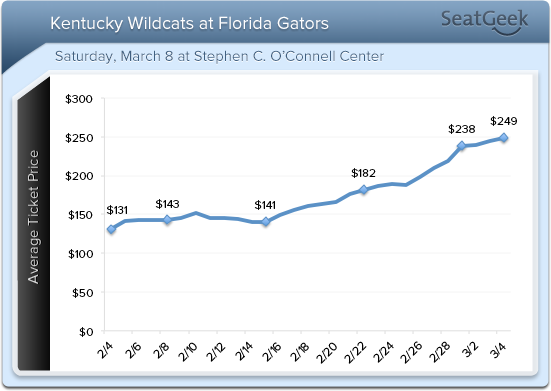 While all eyes were on Syracuse in the ACC and Wichita State’s run to perfection for most of the season, the Florida Gators were quietly moving to the head of a competitive SEC class, making a play for their own perfect record in conference competition. With Syracuse’s recent struggles, it was No. 1 Florida that emerged as the strongest team heading into NCAA March Madness season; the Gators are looking to return to the Final Four since their back to back national championships in 2006 and 2007. Their current streak of three straight Elite Eight appearances make it clear that this team is built on a foundation capable of a lot in the tournament, and perhaps this year’s regular season achievements are the last piece of the puzzle to complete their vision of a title contender.

Standing in the way of Florida’s conference perfection and momentum toward the SEC and NCAA tournaments is No. 25 Kentucky, the most recent incarnation of Coach Cal’s remarkable young teams fueled by top-notch recruiting classes, ridiculous talent, and proven coaching. While the Wildcats began the season heralded in the polls, their failure to defeat any ranked teams except for then-No. 6 Louisville December 28 has dropped them to the bottom of the current rankings.

This regular season finale could go a long way to setting their postseason course, and the fans know it. At an average ticket price of $249, Kentucky’s visit to Florida on March 8 the most in-demand regular season college basketball game in the state of Florida since at least 2009 when we began monitoring the secondary market. Even the cheapest seats available are going for more than 4x face value on the secondary market. The average ticket price for Saturday’s game has risen 77% from $141 to $249 since UF defeated Kentucky in Lexington February 15. In comparison to the average Gators home game this season ($60 average ticket price), ticket prices for UF-Kentucky are more than 4x as expensive.

Ticket prices for Saturday’s game are on par with those for the UF-Kentucky game in Lexington at Rupp Arena earlier this season, which drew an average ticket price of $252. There are currently about 160 tickets available on the secondary market for this Florida-Kentucky game in Gainesville, representing less than 2% of the capacity of the Stephen C. O’Connell Center (about 11,500). The face value of all single-game tickets is $30, but with the game now sold out, the cheapest upper-level seat available on the resale market is listed for $122, or more than 4x face value. Lower-level tickets start at $333 (more than 11x) behind the basket, and some of the best seats in the house are listed for $534 apiece (nearly 18x).

No. 1 Florida Ready to Sweep No. 25 Kentucky