Florida State has been faced with a number of tough tests this season on their road to defending their national championship. In week one, Oklahoma State pushed them to the edge, and in week four, Heisman-winning quarterback Jameis Winston was suspended for off-filed behavior and they needed overtime to defeat Clemson. Week five took them on the road to NC State, where they needed a large second-half comeback to defeat the Wolfpack in a shootout.

Now, with week eight looming, the Seminoles have to face both a classic rival, No. 5 ranked Notre Dame, as well as the psychological challenge of being passed in the polls by now-No. 1 Mississippi State. The Bulldogs will be off this week, but the Seminoles must keep battling without the top ranking they’ve held since December 1, 2013. It probably feels a bit like being body slammed on the sideline after a well-executed crossing route.

The Seminoles will need to deal with their personal issues before kickoff, though, because the Fighting Irish of Notre Dame has proven to be an opponent capable of taking down opponents in any number of ways this season. Led on offense by quarterback Everett Golson, finally taking advantage of the opportunity to show his true potential, Notre Dame has scored at least 30 points in every game except their most recent fourth-quarter victory over Stanford. That win over the Cardinal highlights their other virtue, a sturdy defense; the last-minute win wouldn’t have been possible if they hadn’t held Stanford to only 14 points, and no opponent has scored more than 17 this year. It’ll be a tough test on both sides of the ball for the Irish to maintain both of those trends against a squad as talented and seasoned as the Seminoles.

The average price paid on the secondary market for a ticket to FSU-ND is $209, making it the most in-demand Seminoles home game since 2011, when fans paid an average of $215 per ticket on the resale market to see No. 1 Oklahoma take on No. 5 Florida State at Doak Campbell Stadium. Those are the only two FSU home games since we started monitoring ticket prices in 2009 to draw an average resale price of at least $200; rounding out the top five ‘Noles home games we have on record are last year’s Miami game ($174) and the 2012 and 2014 Florida games ($169 and $157, respectively). 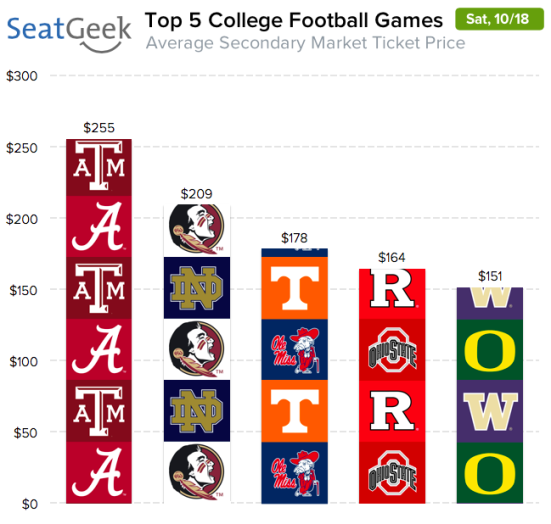 During this weekend in college football, only the Alabama-Texas A&M game in Tuscaloosa will be a hotter ticket, with seats currently going for an average of $255 on the resale market. But it’s worth noting that FSU-ND will have the steepest get-in price (cheapest ticket available) of any game that weekend; the least expensive seat you can find today is listed for $183, while ‘Bama-A&M tickets can be found starting at $115.

Beyond those two games, other big-ticket matchups of the weekend include Ole Miss-Tennessee ($178 average price, $138 get-in), Ohio State-Rutgers ($164, $64) and Oregon-Washington ($151, $71). FSU-ND currently ranks as the 13th-most in-demand game of the year in college football, and it’s 2nd among games involving an ACC school to South Carolina at Clemson ($227 average ticket price, $119 get-in).