As this crazy football season first unrolled, Georgia Bulldogs running back Todd Gurley quickly reasserted himself on the national scene and Heisman discussion. And his team, despite losing a veteran quarterback and defensive leadership, staked itself on the inside track toward an SEC East title and, with that, an inevitable place in the College Football Playoff discussion based on the conference’s reputation. Gurley had a dust up with the NCAA, however, and in his absence the Bulldogs got buried unexpectedly by the previously lackluster Florida rushing attack. He’s finally back, and UGA isn’t stuck in the dog house quite yet, so what better time for another rivalry between the hedges?

While Georgia is on the upswing, hoping their returning star can lead them to the SEC East promised land, the Auburn Tigers are still coping with the fact their playoff hopes are all but dashed after a late, disappointing loss to Texas A&M. Gus Malzahn’s team won’t give up, however, with even the slightest hope of an SEC West title or New Year’s Day bowl game still fueling this dynamic running attack. But it’s not like they needed the inspiration; the Iron Bowl and Cocktail Party rivalries these teams have with other SEC schools doesn’t diminish the luster of this always important border clash. The decades of history and high conference stakes definitely have fans excited to get in seats at Sanford Stadium for Georgia-Auburn 2014.

Fans are paying an average of $270 on the secondary market for a ticket to Saturday’s game at Sanford Stadium, making it the most in-demand Georgia home game since at least 2010 when SeatGeek began monitoring ticket prices. This Auburn game is only the third in the last five seasons of Georgia football to draw an average price of over $200 per ticket; the other two were last year’s LSU game ($252 average ticket price) and this year’s home opener against Clemson ($204). Below, we’ve highlighted the top 10 Georgia home games by average ticket price since 2010. 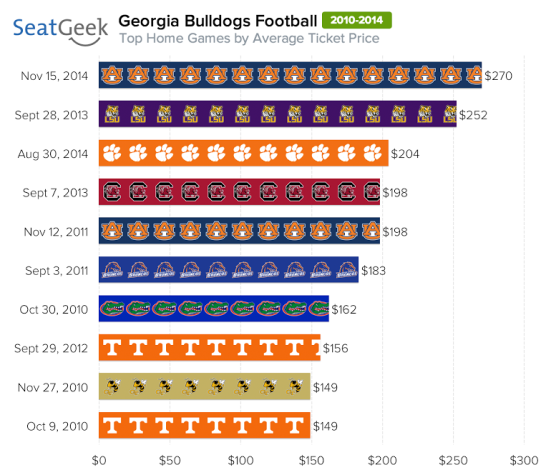 The cheapest available ticket for Auburn at Georgia is currently listed for $135, the second-highest get-in price of the weekend in college football behind only the Mississippi State-Alabama game in Tuscaloosa (starting price of $191). In comparison to Auburn’s most recent trip to Athens, tickets are selling for 35% more on average for this weekend’s game. Tickets for the Nov. 12, 2011 game between the two teams at Sanford Stadium resold for an average of $198.

The $270 average ticket price for Auburn-Georgia this weekend is higher than the average price of any regular season Falcons or Hawks home game in the last five seasons. The priciest Falcons game this season was the home opener against the Saints on September 7, which drew an average price of $160 per ticket. The Hawks’ most in-demand home game since 2010 will be the Cavaliers game on New Year’s Eve next month; tickets for that game are reselling for $222 on average.

Last year provided one of the many classic moments during Auburn’s run to the National Championship; what will Auburn-UGA 2014 bring?