The first leg of the 2014 Triple Crown of Horse Racing is almost upon us, with this year’s Kentucky Derby at Churchill Downs in Louisville scheduled to finally run Saturday, May 3. Although it’s only the first step toward one of the hardest accomplishments in all of sport, the “Run for the Roses” remains the crown jewel of the thoroughbred scene.

It’s always an event worthy of the beautiful and powerful animals at its center, and the scene on the infield at the Kentucky Derby remains a gift to the people watchers and party goers who are brave enough to attend the biggest bluegrass bash of the year. Horse racing, like boxing, does not consistently command the national spotlight as it once did, but seeing the big ticket showdowns first hand remains a bucket list item for many, as you can see by the consistently high ticket prices. 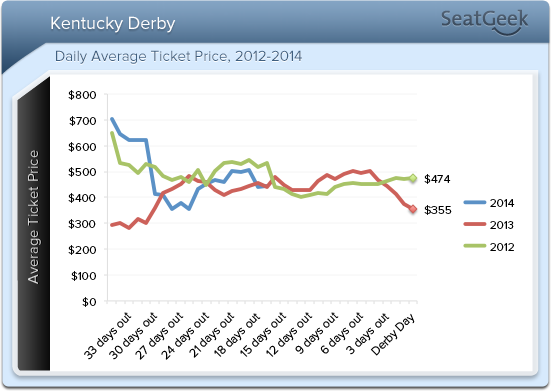 The cheapest seats currently available in the various seating areas at Churchill Downs include Lower Clubhouse tickets for $333, Mezzanine grandstand seats for $357, and Upper grandstand passes for $649. The next tier of seats feature Mezzanine clubhouse tickets starting at $886 and an Upper clubhouse for $974 or more. If money isn’t an object, tickets in Millionaires Row start at $3,886, and you can purchase a VIP table for 8 in the Turf Club with balcony access at the finish line for a mere $36,000; don’t worry, all food and drinks are included in that price tag, so race-goers won’t be getting totally fleeced.

Kentucky Derby ticket prices remained relatively steady last year from this point through race week, when the average fell more than 40% over the last five days from $502 per ticket to $355 on Derby Day. In 2012, prices fell 28% from $533 17 days out from the race to $415 with 10 days to go; prices fluctuated minimally from there on out, with the average finishing at $474 per ticket on Derby Day. Based on how prices have moved over the last few years, we expect prices to dip by at least 15-20% between now and the race.

There are only a few hundred general admission infield tickets remaining on the secondary market, ranging from $70-$100 in price, and those will likely sell out several days before the Derby. While they don’t offer a great view of the race, those tickets are purchased by folks who are most concerned with being there for the day-long party on the infield. Lower grandstand tickets are the next-cheapest option, starting at $195 apiece right now on the resale market, and will likely be the least expensive option available for those who wait until the last minute to buy their tickets.

Vicar’s In Trouble Qualifies for 2014 “Run for the Roses”