For some folks, you can go home again; for others, nothing’s better than setting off for newer and greener pastures. For the Louisville Cardinals, the 2014 football season is going to be a little bit of both. Coach Bobby Petrino is back after a seven-year absence that took him to the NFL, the SEC, a brief scandal-caused exile, and most recently one season at Western Kentucky. He’s being welcomed back to The ‘Ville after the departures of coach Charlie Strong (to Texas) and their great quarterback Teddy Bridgewater (to the Minnesota Vikings). And while it’s a big deal for Petrino’s huge personality and bigger playbook to be back in the fold, that excitement is only part of the hype that’s baking in Papa John’s biggest oven.

The Cardinals are bound for the big time of the ACC and the big checks that come along with membership in the “Big Five” of the NCAA football conference landscape. While some fans may worry about the step up, their confidence in the firepower Petrino brings where he goes and the defensive prowess built by Strong leaves no room for worry as they venture to some of the bigger stadiums in the East. Last season’s bowl rout of the Miami Hurricanes – who will now be conference rivals – has been a springboard for fans to get their popcorn and trash talk ready for their inaugural season. Things this season will start as they ended – Miami visits the Cardinals for a rematch September 1. With this kind of football hype, who knows what Rick Pitino will have ready on the basketball court when Midnight Madness rolls around.

The average ticket price for the season as a whole has nearly tripled from last year, and for the first time, Louisville tickets are among the top 10 most expensive in the country. This is especially surprising considering that at this time last year, Louisville held the 56th-most expensive tickets in the country. We’ve compared this price jump to that of other teams that have changed conferences in recent years, and this is the largest year-over-year increase we’ve seen among any of them.

As a result of Louisville’s move from the AAC to the ACC, Louisville ticket prices on the secondary market this year have skyrocketed from 2013’s figures. Last year, Cardinals fans had paid an average of $59 per ticket for Louisville home games through mid-July, a figure that has increased by a huge 190% to $171 per ticket in 2014. Louisville’s contest against Kentucky will be the most expensive of the year, with tickets averaging $306 on the secondary market. If prices hold, this will be the most expensive Louisville home game since SeatGeek began recording data in 2010. In fact, 2014 games make up the top three most expensive Louisville home games of all time — the Kentucky game is trailed by this year’s matchups against Florida State and Miami, which are averaging $224 and $167, respectively.

Ticket Demand for Louisville Football in the ACC

The Cardinals aren’t the only team to switch conferences this year; Maryland and Rutgers both moved to the Big Ten from the ACC and the AAC, respectively. Louisville’s 190% jump in ticket prices year-over-year, however, is the highest of the three. Maryland’s average ticket price on the secondary market has jumped from $55 through mid-July 2013 to $74 now, a 35% increase, while Rutgers ticket prices have only risen 8%. In fact, Louisville’s boost in ticket price is the highest year-over-year increase after a conference switch we’ve seen from any team, beating out Texas A&M’s 88% bump after moving to the SEC in 2012. 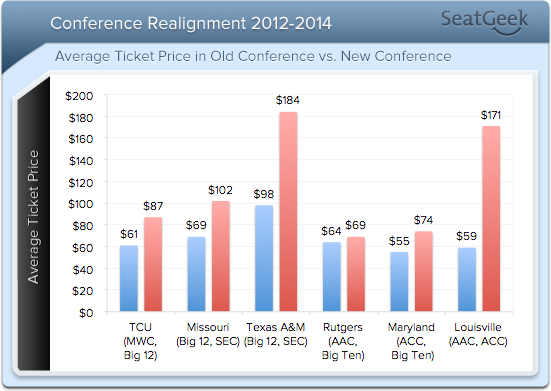 Louisville has already sold out of both season tickets and single-game tickets this year, driving fans to the more expensive secondary market. The cheapest season tickets Louisville sold through their box office cost $156 for upper-level seats. By comparison, the least expensive tickets on SeatGeek right now for a ticket to each of Louisville’s six home games would run you $327, making it 110% more expensive to purchase tickets on the secondary market. Compare that to purchasing the cheapest available ticket to each 2013 Louisville home game in early July: that would have cost $230, 47% cheaper than the lowest-priced box office season tickets.

Teddy Bridgewater Goes Out In Style

Looking Ahead to Louisville in the ACC

(Photo courtesy of the Kentucky National Guard via Flickr)