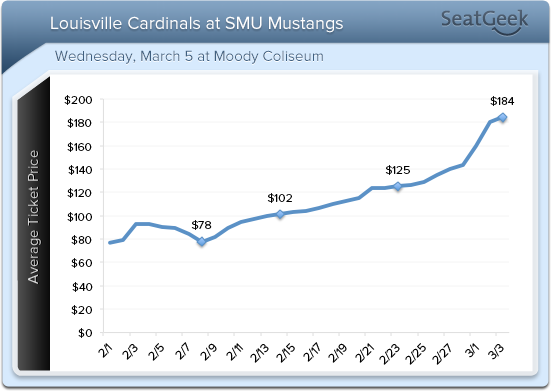 The last week of the NCAA Basketball regular season is absolute chaos in the newly-minted American Athletic Conference. It’s turned this Wednesday’s game between No. 11 Louisville and No. 18 SMU at Moody Coliseum in Dallas into the most demanded regular season college basketball game we’ve ever seen in the state of Texas. The average ticket price for the Louisville game ($184) is 90% higher than for the Cincinnati game February 8, which had previously set the record for the most expensive ticket in SMU history ($97). The Louisville game is more than three times as expensive as an average Mustangs home game this season ($57). Only about 120 tickets are currently available on the secondary market for Louisville at SMU, representing less than 2% of capacity at Moody Coliseum.

Tickets for Wednesday’s game are going for nearly three times as much as they did for the first meeting between SMU and Louisville earlier this season. Fans paid an average of $64 per ticket on the secondary market to see the Cardinals beat the Mustangs, 71-63, in Louisville back on January 12. Ticket prices on the secondary market are as high or higher than the cost of a season ticket across the various seating tiers at Moody Coliseum in Dallas. Baseline tickets, which cost $125 each in a season ticket package, start at $121 on the resale market for the Louisville game. Sideline tickets ($240) start at $305 for tomorrow’s game and midcourt tickets ($300) start at $387. Lodge or club level seating for SMU-Louisville can’t be found for less than $756 per ticket.

Prior to SMU-Louisville, the hottest regular season college basketball ticket of the last five seasons in Texas had been Kentucky-Baylor at AT&T Stadium earlier this season on December 6, which drew an average ticket price of $138. Then-No. 20 Baylor upset then-No. 3 Kentucky 67-62. Interestingly enough, tomorrow’s game is actually more expensive than any Dallas Mavericks home game this year other than the Miami Heat’s visit on February 18, which drew an average ticket price of $193.

Ticket prices for Wednesday’s game have more than doubled in the three-plus weeks since SMU upset then-No. 7 Cincinnati at home on February 8. The average ticket price for the Louisville game that day was $78 and is now up to $184, and the cheapest ticket available has risen from $50 to $122. The graph shows that the daily average ticket price has risen each day since the upset of Cincinnati; it was up to $102 February 14 when the Mustangs defeated Rutgers and $125 February 23 when they topped UConn.

Because Louisville lost their high-profile and highly-demanded game at Memphis this weekend, they’ve fallen back to the pack for the AAC regular season title. Along with those two squads, SMU and Cincinnati remain in the race for the crown and top seed in the AAC Basketball Tournament at the FedEx Forum in Memphis. SMU finishes its season against Louisville and Memphis, while the Tigers must also face the Cincinnati Bearcats. The final two dates on the inaugural AAC conference schedule will be exciting and excruciating for fans to watch; who will take control of their destiny and rebound to finish the year on top of the American?

SMU Manages to Pony Up Against UCF