When the Nets moved to Brooklyn a few years ago, they had a complicated marketing effort to craft. A snazzy new logo and a dash of Jay-Z in the courtside seats can create hype, and a state of the art facility like Barclays Center can keep fans entertained while they’re there and keep their butts coming back to seats to see and be seen.

But the only tried-and-true method to build a fan base and build a legacy in a neighborhood like Brooklyn is simply to win, and developing heated rivalries with the best teams in the league is icing on the cake. And, to that end, they have traded and spent their way to a roster loaded with playoff experience and defensive grit; now is the time to cash in some of that capital and display dominance over the biggest name in the business – the Miami Heat.

Lebron James, Dwayne Wade, Chris Bosh, and crew positioned themselves as a division winner again this season as they eyed a third title, but they never could figure out the Nets. Brooklyn swept all four regular season games against the Heat, showing no signs of being intimidated by King James or the weight of making Brooklyn a real-deal basketball town. And by the looks of the secondary ticket market, they’ve succeeded in making playoff basketball in BK a premiere destination.

Since the Nets’ Game 7 win in Toronto, prices for their second-round home games against the Heat have shot up 69% on average from $197 to $333 per ticket. The biggest jump was for Game 3 on Saturday, May 10; the average ticket price for that first game in Brooklyn increased 93% from $177 to $341. Tickets for Nets-Heat at Barclays Center are the most expensive since at least 2010 when we began tracking NBA playoff ticket data. The Heat’s home games in Miami are the second-most expensive this year at an average price of $215, still $118 lower than the average in Brooklyn. 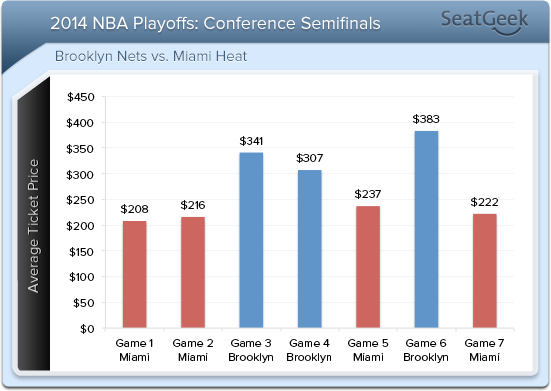 Nets-Heat in Brooklyn is easily the hottest ticket of the second round. Even looking at the average ticket price of each individual game across all four series, the three most expensive are Games 3, 4 and 6 at Barclays Center; a potential Thunder-Clippers Game 7 is fourth at an average of $295 per ticket. The combined average price of the Nets’ two guaranteed home games against the Heat (Games 3 and 4) has increased 79% from $183 to $328 per ticket since the team’s win in Toronto. Here’s a game-by-game breakdown of how the average ticket price has moved in the last 24 hours for Games 3, 4 and 6 at Barclays Center: Game 3 is up 93% from $177 to $341 per ticket, Game 4 has increased 57% ($196 to $307), and a potential Game 6 has already risen 46% ($262 to $383).

Average Home-game Ticket Prices for Second Round of NBA Playoffs

Much was said as the NBA regular season came to an end that the Brooklyn Nets were dropping a few games strategically in order to potentially draw the Miami Heat in round two. Because the Nets swept the regular season series against Lebron & Co., the analysts say, Brooklyn was tanking a game here and there in an effort to setup a Beat the Heat scenario in the second round.

Let’s see if Pierce, Garnett, and the rest of the Nets roster should’ve been more careful with what they were wishing for as they now stand in the way of a fourth consecutive Eastern Conference Finals for King James, D-Wade, Chris Bosh, and the rest of the South Beach crew.