Despite being worked over by the Miami Heat like a speed bag all season, fans of the Charlotte Bobcats have pushed the average ticket prices for playoff games in the Queen City higher than those on South Beach. The Heat haven’t lost to Charlotte in over four years, running their winning streak against the Cats to 16 with a Game 1 victory in the 2014 NBA Eastern Conference Quarterfinals. While Miami needed a late push to overcome a late deficit versus Charlotte, it was yet another indication that LeBron & Co. can win any night in any number of ways when they’re lined up across from the soon to be Hornets.

And somehow, this has grown boring for Heat fans but remains exciting for Bobcats faithful. Believe it or not, demand for tickets in this series is actually 10% higher in Charlotte than Miami. Since the Bobcats-Heat matchup was set on the last night of the regular season, the average ticket price on the resale market for the games in Charlotte has been $167.00, a 22% increase from the $137.47 average price before it was determined that the Heat would be coming to town. The matchup has had the opposite effect in Miami, however, as the average price on the secondary market for first-round games at American Airlines Arena has fallen 13% from $173.83 to $151.67 in the same span. 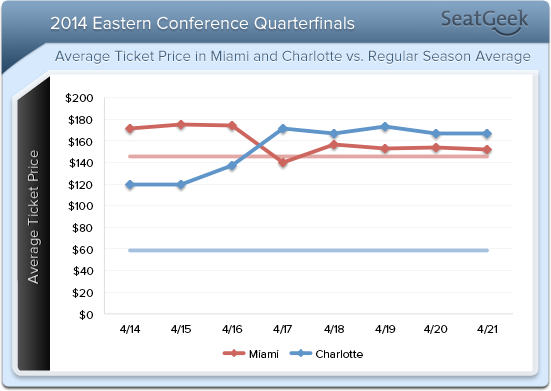 This isn’t simply playoff fever in North Carolina. The average ticket price of the Bobcats’ first-round home games against the Heat is more than double what it was back in 2010 for the team’s first-ever playoff series. Those games against the Magic drew an average price of $77.83 per ticket on the resale market. Perhaps the arrival of Big Al Jefferson, the youth of Kemba Walker and Michael Kidd-Gilchrist, and the impending return to the Hornets moniker has “The Cable Box” of Time Warner Cable Arena particularly buzzing. Whatever the reason, Miami fans should be ashamed by their apparent boredom with the build-up to a potential three-peat.

Arguably the best player of our generation in James and the long-standing franchise foundation in Dwayne Wade look to make history, and Heat fan interests dwindles on the secondary market to the point that Miami struggles to fill American Airlines Arena for a postseason game. Let’s see if the Bobcats can finally put up a fight against the Heat and the competition warms the interest of fans in Florida.

In the regular season, Heat home games were the 2nd-most expensive in the league at an average price of $145.07 on the secondary market behind only Knicks games at MSG ($158.61). They were nearly 2.5x as expensive as Bobcats home games ($58.45), which were 19th-most expensive in the NBA. Comparing the average price of these first-round playoff games in each city to the regular season averages, the playoff premium in Miami is just 5%, while in Charlotte it’s a whopping 186%. Tickets for Game 3 in Charlotte on Saturday begin at $92 each on the resale market, and lower-level tickets can’t be found there for less than $224.

There are also a limited number of tickets still available from the Bobcats box office starting at $93.30 in the upper deck (essentially the same starting price as the secondary market), but the lower level is sold out. Those $224 lower-level seats on the resale market have a face value of $169.36. The overall average ticket price for the Bobcats-Heat series across all seven potential games is $157.19, 2nd-highest of this year’s eight first-round series behind only Clippers-Warriors ($167.82).

How to Get Club Tickets for the Atlanta Braves

How to Get Club Tickets for Seattle Mariners