In the new era of the College Football Playoff, teams which have faced a tougher regular season schedule have a better case to put before the selection committee. Unfortunately for the Michigan State Spartans, the Big Ten is full of teams trying to rebuild, so their schedule is lacking much of the strength necessary to compare resumes with SEC and Big XII schools. Sparty scheduled No. 4 Oregon early in the season and had the game in hand for the first half; however, they came up short in the second half and suffered their only loss of the year to date. The committee still considers MSU top ten material, though, and the Spartans continue slamming everyone in their path as they hold on to hope of getting back into the National Championship picture,

Their toughest test by far of the B1G conference schedule comes to East Lansing this weekend when the Ohio State Buckeyes come knocking on the doors of Spartan Stadium. The Buckeyes also sit with only one loss – an out of conference defeat at home at the hands of lackluster Virginia Tech. They had a close call two weeks ago at Penn State but survived – a testament to the evolution of freshman QB JT Barrett and an underrated defense. The Buckeyes probably have no chance at the playoff, but this rematch of last season’s Big Ten Conference Championship game still has plenty of implications for this year’s B1G title and a New Year’s Day bowl game. And while no invading rival moves the needle for Michigan State like “Big Brother” Michigan, this rivalry is churning record levels of demand in the land of green and white.

Fans have so far paid an average of $160 for a ticket to Saturday night’s OSU-MSU game, making it the most in-demand Spartans home game against a non-Michigan opponent in the last five seasons. The previous high average ticket price for an MSU home game in that period against a team other than the Wolverines was $143 for the 2010 Notre Dame game. For reference, MSU’s last three home games against Michigan have ranged in average ticket price from as low as $176 this season to a high of $214 in 2011. Last year’s Ohio State-Michigan State Big Ten Championship Game in Indianapolis drew an average ticket price of $218. 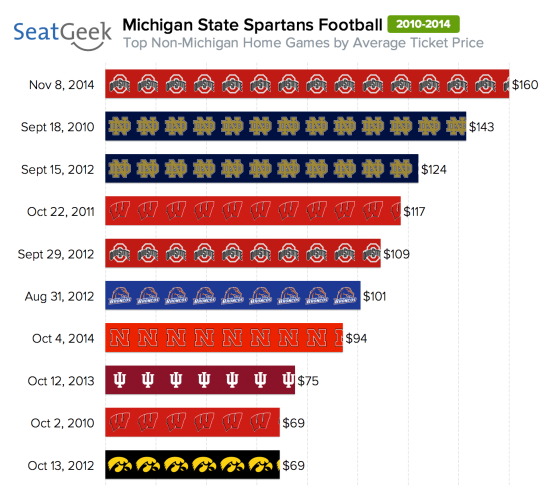 Prices are up almost 50% compared to the 2012 game at Spartan Stadium against the Buckeyes, which drew an average ticket price of $109. The price of the cheapest available ticket is also up nearly $50 from that 2012 game; the least expensive option on the Thursday before that game was $67, but as of this morning, tickets for this weekend’s game start at $115 in the upper level.

Ohio State-Michigan State is the 4th-hottest ticket of the weekend in college football behind only Alabama at LSU ($301 average ticket price), Notre Dame at Arizona State ($220) and Oregon at Utah ($201). Those four games are also the only four this weekend with a get-in price (cheapest ticket available) of at least $100.

Single-game face value ticket prices ranged from $80 in the upper level and behind the end zones to $150 in the lower level at midfield, but the game is completely sold out, leaving the secondary market as the only option to purchase tickets. Those $80 tickets start at $115, and the cheapest seats in that $150 face value range are now listed at $190 on the secondary market.