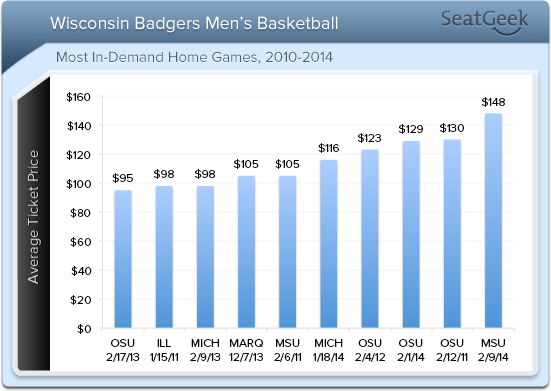 One of the most heated rivalries on the Big Ten hardwood will be rekindled this weekend when Wisconsin hosts no. 9 Michigan State at the Kohl Center in Madison on 2/9. For the past few seasons, these two teams have represented the most complete and consistent programs in the conference, and their matchups often hold serious regular season title implications. That won’t be the case this time, however, for despite Michigan State’s continued success, the Badgers have lost five of their last seven to drop to fourth in the Big Ten and out of the top 25 rankings.

The Spartans had a smaller hiccup of their own, dropping a game to in-state rival Michigan, losing a non-conference game to Georgetown, and needing overtime to defeat conference rival no. 15 Iowa. Despite the trials for both squads, Sunday’s game remains the most in-demand game at the Kohl Center since at least the ’09-’10 season, topping the Feb. 12, 2011, Ohio State game ($130 average ticket price), a 71-67 upset by the no. 14 Badgers over the top ranked Buckeyes. Michigan State – Wisconsin ticket prices have remained relatively stable of late; demand is almost three times what it was for the MSU game in Madison last year, and even the cheap seats start at $86, more than three times face value ($24).

With an average ticket price of $148 on the secondary market, Badgers-Spartans tickets are going for nearly three times what they did for the same matchup in Madison last January ($54) and twice the rate of Wisconsin’s season average for a home game this year ($74). Of the 350 tickets available on the secondary market, the cheapest tickets start at $86 in the 300 level of the Kohl Center. Lower-level tickets, which originally sold for $30, start at $125 behind the basket, and lower-level seats along the sidelines (also $30 face value) are available for no less than $211.

The Badgers are far and away the hottest basketball ticket in Wisconsin, even ahead of their professional counterparts, the Milwaukee Bucks, who have just one home game on their schedule this year on pace to draw a higher average ticket price than Wisconsin’s season average of $74 per ticket. Tickets to that game on March 29 against the Miami Heat are going for $104 each on average, which is still a 30% discount compared to an average Badgers-Spartans ticket. Compared to other memorable college basketball games this season like UNC at Syracuse, the average ticket price for this game even exceed hyped ACC standards.

While this Big Ten rivalry looks a little one sided over the past three seasons, its amazing finishes like this that really signify how intense these match-ups are.