With an estimated $1.7 million already spent on the secondary market for Michigan Wolverines home games this year, those who were shut out of season tickets seem to be turning to other ways to procure seats. 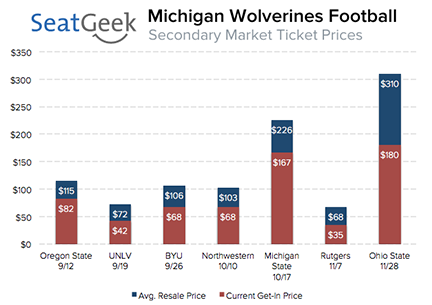 Overall we estimate $1.7 million has been spent on the secondary market on Michigan tickets, the most of any team in college football. The next two teams on the list are Notre Dame and Alabama, which have an estimated $1.4 million and $1 million spent, respectively.

As a team with fans around the country, of those looking for Michigan tickets on SeatGeek, just 26 percent live in The Wolverine State. Interestingly the next state on the list is Ohio with 14 percent. California (7 percent), Texas (7 percent) and New Jersey (6 percent) round out the top five.


As a sign of the increased hype for Jim Harbaugh and his Wolverines, last year at this point we estimate only $1.1 million had been spent on Michigan tickets on the secondary market. This put the team fourth in college football, behind LSU, Notre Dame and Alabama.