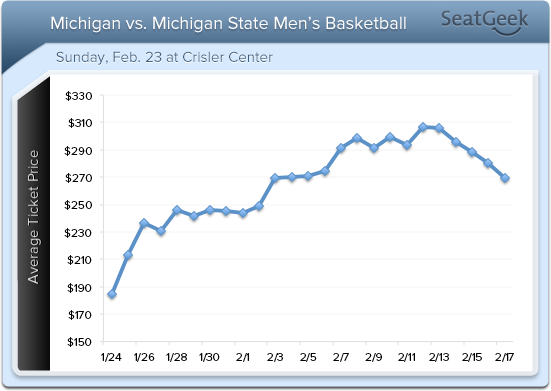 For the sixth time in the last three seasons, the Michigan – Michigan State basketball game this Saturday at the Crisler Center in Ann Arbor will feature two ranked teams. As an added bonus, these two Big Ten rivals are currently tied for the top spot in the conference standings; the winner of this Wolverines – Spartans matchup will walk away with not only bragging rights but also a one-game lead with only four games left in the regular season. When these two met back in January, Michigan won a close game in East Lansing, 80-75, securing their fifth win over Tom Izzo’s MSU team in the last seven games.

The Wolverines are now set to defend their home court after losing two of their last three Big Ten games, including a road loss at Iowa and a home loss to Wisconsin. MSU also fell in their anticipated matchup with Wisconsin, leveling these two in-state rivals with matching conference records. Since they’re both still in the hunt, demand for UM – MSU basketball tickets is rabid. At an average ticket price of $269, Sunday’s game is the most in-demand Michigan basketball home game since at least 2009 when we began monitoring the secondary ticket market and more than 4x as expensive as an average UM home game this season ($61).

The game is also a hotter ticket than the Ohio State-Michigan football game at the Big House this past November, ($228 on average). In fact, tickets to this weekend’s game at the Crisler Center are more expensive than for any 2013 Wolverines football game aside from September 7 against Notre Dame ($330). The average ticket price for this weekend’s game is more than double that of the next-most expensive Michigan home game this year, which was the Arizona game back on December 14 ($114).

Upper-level tickets for Sunday’s game were originally sold at a face value of $40 per ticket by the UM ticket office, but now with the game sold out, the least expensive seat available on the secondary market is listed at $176 — more than 4x face value. That $176 ticket is just a single, though; pairs start at $191 per ticket in the upper level, and it’ll cost you at least $304 per ticket for seats in the lower level, which had a face value of $60. And at the high end of the spectrum, we’ve seen some fans pay more than $1,000 per ticket for seats in the first few rows from the court.

There is hope for fans still looking for tickets to Michigan State at Michigan. While there are only about 500 tickets available on the secondary market (~3.5% of capacity at the Crisler Center), prices have fallen slightly with both the Spartans and Wolverines coming off losses over the weekend; prices will likely continue to dip as we inch closer to tip-off. Ticket prices for Sunday’s game jumped 65% in the course of three weeks from $185 the day before UM’s upset win at then-No. 3 MSU to a peak of $307 per ticket on February 12, but they’ve since come down 12% to an average of $269.

Although both teams have had recent challenges as their Big Ten conference schedule has rolled around, they are both currently 10-3 and tied for the regular season conference title. Michigan has dominated the rivalry lately, and this latest matchup will be a key step to securing the league championship and top seed for the Big Ten tournament in Indianapolis.