The Minnesota Vikings conquered the Rams in week one of the 2014 NFL season, and that blowout victory has more fans making a run on the bank: TCF Bank Stadium, that is. This upcoming weekend’s home opener against the New England Patriots has the highest ticket prices we’ve seen for Minnesota’s first home game in the last five years. Yes, the Metrodome is gone and the Vikings are setting up shot in the Minnesota Golden Gophers’ swanky new digs until their own new field is built, but it doesn’t appear to be the fresh new stadium smell that has fans opening their wallets; instead, it’s probably the fresher smell of the opponent drawing fans to the home opener.

The record-high prices versus New England are relative to a sorry slate of previous opponents, including the Browns (2013), Jaguars (2012), Buccaneers (2011) and Dolphins (2010). At an average price of $159 per ticket on the secondary market, Sunday’s game against the Patriots nearly triple some of past years: the last three home openers have drawn average ticket prices of between $60 and $90 on the resale market. Back in 2010, Brett Favre’s final season, fans paid $110 per ticket to be there for the first home game against Miami.

While first-round draft pick Teddy Bridgewater hasn’t taken over the huddle quite yet, exciting play makers like 2012 MVP Adrian Peterson and 2013 All-Pro Cordarrelle Patterson give their squad plenty of swagger for rookie head coach Mike Zimmer to funnel into his game plan. The Patriots lost in week one, so this Vikings home opener could be more than just a big day at the box office; it could be a big step toward an NFC North title. 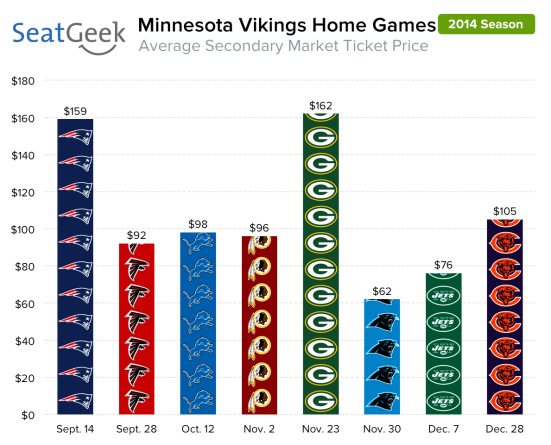 Overall, secondary market prices for Vikings home games are down about 10% from 2013. Games against the rest of the NFC North are the best measure of demand from year to year, and all three of those games are less expensive this season. At this time last year, tickets for games against the Packers, Bears and Lions were going for $185, $115 and $104, respectively; this year, they’re going for $162, $105 and $98. Tickets are at or below face value for all Vikings home games except those against the Patriots and Packers, and those two games are also the only two that are sold out.

The team priced those games a bit higher than the other six regular season games and required fans to purchase tickets to either the Jets or Falcons game along with them in a two-game pack. Tickets for the Patriots game ranged from $53-$161 at single-game prices, and now on the resale market they’re listed for $83 on the low end with those $161 face value seats starting at $256 and up. If you’re looking for the absolute cheapest seat to a given game, you can find an upper-level ticket for less than $100 to any game, including the Packers in late November ($99). Tickets for the Patriots game this weekend start at $83.

Cordarrelle Patterson to the House

The Best NFL Coaches of All Time

How to Save Money When Buying Vikings Tickets