With the 2015 MLB All-Star Game less than two weeks away, right now the average 2015 ASG ticket currently costs $716*. That’s far and away the most expensive event in Cincinnati in the SeatGeek database, which goes back to 2010. Even the current get-in price of $363 is more expensive than any other Cincinnati event in that time span.

The average Reds ticket this season has cost just $33, which ranks second-to-last in baseball, topping only the Brewers, who average $30 per ticket. Overall, the average price of an MLB ticket this year is $40. Instead of buying a single ticket to the All-Star Game, a Reds fan could actually save money and buy two second-half season tickets in the upper deck for just $663 total. 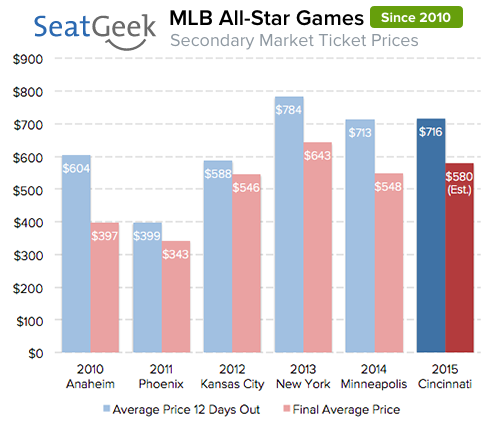 Even though Cincinnati would appear to be a poor baseball market, a ticket to this year’s All-Star Game is at least on par with recent seasons. Where the average price stands currently, this All-Star Game would be the most expensive in the past five years, even topping the 2013 ASG in New York that had an average price of $643. However, when comparing ASG prices 12 days out, this year’s game falls in line with last year’s, and is cheaper than the 2013 ASG at Citi Field.

In the past five years, ASG ticket prices have fallen by an average of 19 percent in the 12 days leading up to the game. If this year follows that trend, we can expect the average ticket price for the 2015 All-Star Game to end up at about $580, which would rank second out of the last six ASGs.

An estimated $3.3 million has been spent on the secondary market for this year’s All-Star activities; that’s $140,000 on the Futures Game/Celebrity Softball Game, $880,000 on the Home Run Derby, and $2.3 million on the All-Star Game.

This All-Star Game is more than 4x as expensive as any Bengals home game since 2010. The most expensive Bengals game in the last five years occurred when they hosted the Steelers on Nov. 8, 2010; the average price was $161. Even the sole Bengals home playoff game since 2010, a 2014 AFC Wild Card loss to the Chargers, only averaged $122 per ticket. A family of six could have attended that game for approximately the same price as one ticket to this year’s ASG.

Data courtesy of SeatGeek.com *Data as of Thursday, 7/3