NBA Ticket Market All About LeBron

After an incredibly busy off-season that featured free agent signings, untimely injuries and the arrival of new coaching regimes across the league, the NBA is back in a big way this week. Opening night featured a Lone Star State throwdown between the defending champs, the San Antonio Spurs, and their division rivals, the Dallas Mavericks, and a game between the Lakers and Rockets that featured some elbows and cussing from Dwight Howard and Kobe Bryant. The Western Conference got to shine, and the superstars didn’t disappoint, either as individuals or as a well-oiled machine.

But the biggest news of the year remains the return of LeBron James to the Cleveland Cavaliers where he’ll be joined by a young star guard, Kyrie Irving, a veteran talent at forward, Kevin Love, and plenty of complimentary players within a new European offense. Though Kevin Durant of the Oklahoma City Thunder is the defending MVP, LeBron remains the biggest draw in the media and at the box office. Cleveland’s instant renaissance is nothing short of remarkable, but The Return of The King is running up the score at cash registers in every NBA market this year, not just on the shores of Lake Erie. Everyone wants to see these Three Musketeers when they’re in town; the decision to pay what it takes to catch the Cavs live is nothing short of a slam dunk. 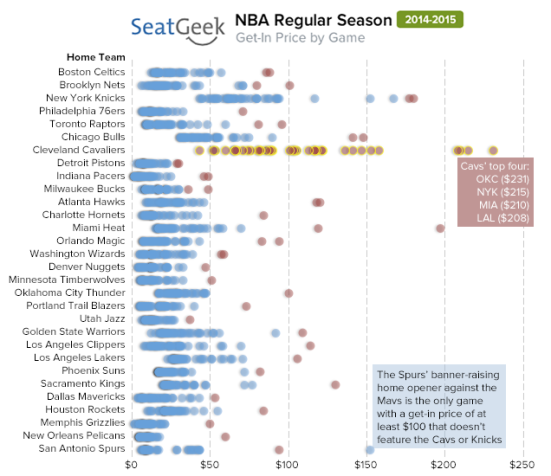 Both of the cheapest tickets to see the Cavs this season are a little under a three-hour drive away from Cleveland against the Detroit Pistons at The Palace of Auburn Hills. Tickets for the January 27 game start at $30, and tickets for the February 24 game start at $29. The cheapest Cavs home game comes December 2 against the Milwaukee Bucks, with tickets starting at $43.

As of this morning, 19 regular season games across the NBA have tickets available on the secondary market for $4 or less. Eleven of those are Indiana Pacers home games at Bankers Life Fieldhouse. In fact, you can currently buy a ticket to 26 of the Pacers’ 41 games in Indianapolis this season for less than $10 each.

Durant Start Season on the Bench

Kobe and Lakers in for Long Season

These are the Visiting Teams Sports Fans Want to See Most

NBA Free Agency: What You Know & What You Need to Know