Before they kick off their Big Ten conference schedule, the Nebraska Cornhuskers welcome an old rival to town. During a 12-year span in the 1980s and 90s, the Miami Hurricanes defeated the Huskers in three of four Orange Bowl matchups which, even before the BCS existed, often represented a major part of the national championship picture. Following that run, the only other game featuring these two squads was the 2001 BCS Championship, and the Canes trounced Nebraska 37-14. It’s been 13 years, and both squads have changed conferences (but who hasn’t, right?), but the Huskers finally get another chance to end up on the right side of this little rivalry.

Miami’s far from what it once was in its glory days; injuries and suspensions have hurt this year’s squad, in particular, and they fell in week one to new ACC rival Louisville. While the Canes are reeling from the dismissal of QB Kevin Olsen this week, they will rely on their steady and sturdy running of Duke Johnson to lead them into Lincoln. The Huskers will be ready with a stingy defense and electrifying running game of their own; as Ameer Abdullah goes, so goes Nebraska in its pursuit of a B1G title.

So far, the average price paid for a ticket on the secondary market to Miami-Nebraska is $188, and the cheapest seat available is listed at $100. That makes this game the second-most in-demand game of the weekend in college football by average ticket price behind only Florida-Alabama ($206). The $100 it would cost a fan to get the cheapest ticket on the market is also the 2nd-highest get-in price of any game this weekend behind only Oklahoma-West Virginia ($103). 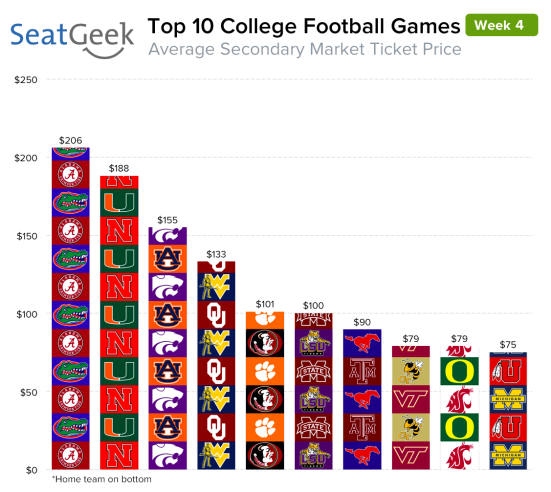 As far as where this game ranks in recent Nebraska history, it’s the hottest Huskers ticket we’ve seen in almost two years since the September 2012 game against Wisconsin, for which fans paid $212 per ticket on the secondary market. Tickets for Saturday’s game are also reselling for nearly double the price of seats for any other Cornhuskers game this season.