After competing for the BCS National Championship following the 2012 season, the Notre Dame Fighting Irish fell back to the pack last year. They lost three of four games against ranked opponents and weren’t relevant in title discussions. While the Irish’s schedule this season didn’t appear nearly as strong, the team wasn’t expected to contend for one of the four playoff spots in this season’s new format. Their chance to make noise with an upset of No. 2 Florida State fell short a few weeks ago, and the moral victory of keeping it close won’t be enough to put them in the final bracket. However, if Notre Dame can claim a victory in their second game of the season against a top ten team, they may still have a shot.

Luckily for the Irish, that second game of this year comes against the only ranked team they defeated last season: the Arizona State Sun Devils. This weekend’s matchup will be in Tempe, however, where ASU is more likely to have its prayers answered without “Touchdown Jesus” looking over the Notre Dame squad. Their faith has already been rewarded once this season when the Sun Devils beat USC on a last-second Hail Mary. No. 9 Arizona State and the No. 10 Fighting Irish are playing an elimination game, of sorts, as the college football scene continues toward its inaugural playoff. Both teams have proven to have both the offense and defense necessary to win a close one; it could be hotly contested to the final whistle, and fans in the desert are paying to pack Sun Devil Stadium to will their squad toward a PAC-12 Championship berth.

Fans are paying an average of $217 for a ticket to Saturday’s Notre Dame-Arizona State game, making it by far the most expensive Sun Devils home game ever. The previous high average ticket price for an ASU home game was $96 for the Pac-12 Championship last season against Stanford, so tickets are going for more than twice as much on average for this weekend’s game against Notre Dame. Single-game face value for season ticket holders ranged from $85 in the upper deck to $115 in the lower level at midfield for the Notre Dame game, meaning that tickets are reselling for more than double face value on average. 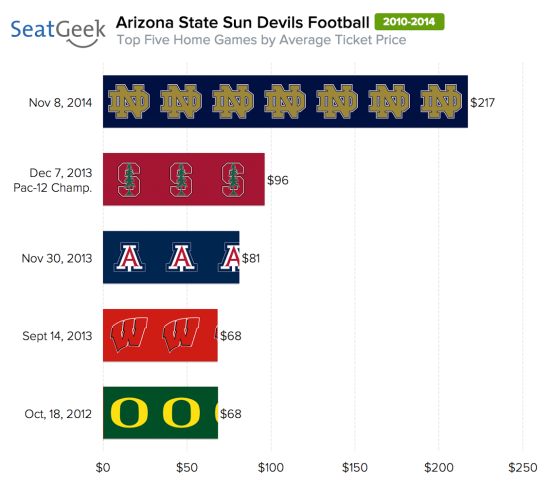 Demand for tickets to this game has increased significantly over the course of the season, and prices are still rising as we get closer to kickoff. Over the last eight weeks, ticket prices for Saturday’s game have risen more than 40% from an average price of $153 back on September 9 to an average of $217 per ticket today. In that same period, the price of the cheapest available ticket has jumped from $116 to $196. This week’s College Football Playoff rankings have both teams in the top 10, so the trend could continue leading up to Saturday afternoon.

Notre Dame-Arizona State is the second-most in-demand game of the weekend in college football behind only Alabama-LSU in Baton Rouge; tickets for that SEC matchup are reselling for $301 apiece. Still, ND-ASU is a hotter ticket than Oregon-Utah ($201 average ticket price), Ohio State-Michigan State ($166), Texas A&M-Auburn ($136), Kansas State-TCU ($115) and Baylor-Oklahoma ($111).

The cheapest pair of tickets on the secondary market for Notre Dame-Arizona State is listed at $196 per ticket in Section 201 of the upper deck at Sun Devil Stadium. To put that in perspective, only 15 other college football games this season will draw an average ticket price higher than $196.