With the Red Sox announcing they will be retiring Pedro Martinez’s jersey on July 28, prices for tickets to said game day have increased by 70 percent (as of Sunday). These prices put the game on par with the July weekend series against the Yankees, the most expensive set of games remaining this season.

With the ceremony happening on a Tuesday night against the White Sox, prior to the Pedro announcement this series was actually one of the cheapest of the summer to see a Red Sox game. The average price spent over the past two days for a ticket to the Pedro ceremony is $90, significantly more than the $68 average price to see one of the three other games in the series.

With the cheapest tickets listed for $72, the get-in price for the Pedro retirement game is currently higher than every remaining Red Sox home game this season, including a weekend series against the Yankees in July. 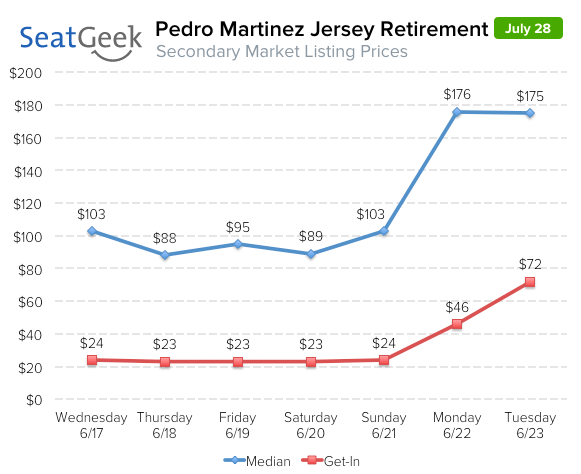 As a comparison, the Yankees are retiring three numbers this year, and saw similar jumps in the ticket market following that announcement in mid-February. Following the announcement on Feb. 17 that the Yankees would retire Bernie Williams’ number May 24 as part of Old Timers’ Day, the median listing price jumped from $76 to $218. On the same day the Yankees also announced they would be retiring Jorge Posada’s number Aug. 22 and Andy Pettitte Aug. 23. The median price for Posada jumped from $121 to $255, and for Pettitte it went from $147 to $266.

Fans looking for a great seat for the ceremony will pay the price, as tickets in the prime sections behind home plate are listed for at least $280. A standing room only spot atop the Green Monster is currently going for at least $179. The cheapest seats available in the bleachers are currently listed for $72.