After a disappointing finish against their NFC West divisional rivals in Seattle in last year’s playoffs, the San Francisco 49ers were looking to start this season off on the right foot, especially with the added luxury and pressure of opening a brand new stadium. Levi’s Stadium, which replaces the hallowed but outdated hashmarks of Candlestick Park, did not prove to be a sweet new home for the Niners during the preseason, however, giving some fans a bit of pause entering the week one kickoff against the Cowboys in Dallas.

The 49ers faithful could rest a bit easier after a 28-17 beatdown of Tony Romo in company, and fans turned their excitement and anticipation back toward the bay and the week two home opener against the Chicago Bears. If there’s one thing that could somehow make San Francisco’s intense defense and electrifying offense look even better, it’s swanky digs in Santa Clara. Fans are paying $386 per ticket on average, easily the most expensive regular season home game the 49ers have played. It tops the 2011 Monday Night Football game against the Steelers ($310) that featured a pair of power outages. In fact, tickets are going for over $100 more on average than for the last playoff game played at Candlestick Park; the Niners-Packers divisional game in January 2013 drew an average price of $280 per ticket.

Demand is significantly higher for the opening game at Levi’s Stadium than for the last major NFL venue debut, which came back in 2010 at MetLife Stadium. The Giants and Jets played home games on back-to-back days (Sept. 12-13) at the new stadium, and tickets resold for an average of $285 each for Giants-Panthers on Sunday and $230 each for Jets-Ravens on Monday night. Niners-Bears is currently the 4th-most expensive ticket this regular season, coming in behind last week’s Seahawks-Packers season opener ($396) as well as Patriots-Broncos in Week 9 ($432 as of today) and the Seahawks‘ first visit to Levi’s Stadium in Week 13 ($404). 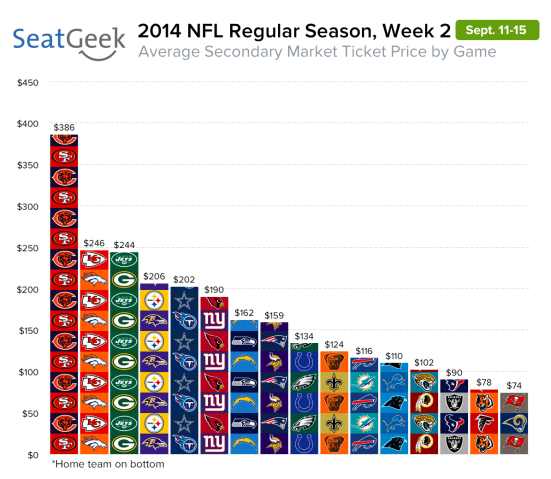 No other game in Week 2 comes close to matching the demand we’re seeing for Niners-Bears; the next two hottest tickets are Packers-Jets at Lambeau and Broncos-Chiefs at Mile High, which have average ticket prices just below $250. The cheapest seat for the opener at Levi’s Stadium, $173, is pricier than an average ticket for 10 of the other 15 games this week. Across Levi’s Stadium for Niners-Bears, tickets are reselling for at least 60-70% above face value.

How to Get San Francisco 49ers Season Tickets

The 49ers’ Most (and Least) In-Demand Matchups This Season