With Wizards Up 2-0, Demand for Game 3 Tickets Continues to Rise

The Washington Wizards have been a punchline for years. But the potential of talents like John Wall and Bradley Beal has finally been realized, ending a streak of five seasons of basketball in the capitol without an appearance in the NBA Playoffs thanks to a second place finish in the Southeast Division this year. Their reward for making the postseason was a matchup with the ever-resilient Chicago Bulls, decimated by injuries – most notably to former MVP Derrick Rose – but still able to secure a No. 4 seed in the Eastern Conference and home court advantage over the Wizards.

The young Wizards have been up to the challenge, however, working their magic in back-to-back close victories in the United Center. Washington now marches home with the advantage in their corner, and fans in one of the most underrated hotbeds for basketball are showing their love for the boys in red, white, and blue.

With Washington up two games to none, demand for tickets to Game 3 has shot through the roof, and it’s reflected in the steadily rising prices we’ve seen fans paying over the past week. The average ticket price on the secondary market for Game 3 has nearly doubled from where it was a week ago when the series matchup was officially set; last Wednesday, tickets went for $99 apiece on average on the resale market, but fans have paid an average of $190 so far today. That 92% increase is the largest we’ve seen across the eight conference quarterfinals series. As of 2:45 p.m. EST yesterday, the cheapest pair of seats available for Game 3 at the Verizon Center was listed at $107 per ticket. 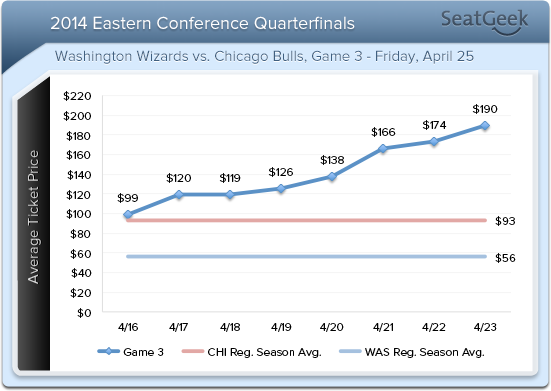 That’s more than 3x the “get-in” price we saw last Thursday, when upper-level tickets for Game 3 could be had for as little as $34 each on the secondary market. To get a seat in the lower level right now, you’ll need at least $208, up from the $98 it would have cost for a similar ticket last week. There are currently about 1,400 tickets available on the secondary market for Game 3, down 56% from a peak of about 3,200 last Wednesday.

While we tend to see ticket prices fall for most events in the final 24-48 hours, based on how the market has trended over the past week and given the Wizards’ win on Tuesday, we don’t expect to see that happen for Game 3 in DC. Make all the jokes you want about uncontrolled spending in the nation’s capitol, but it looks like this early Wizards playoff surge is starting a real grass roots movement to get excited fans in the seats to push this young, talented squad forward to its first second-round series since 2004-2005.

What makes this spike in demand for Wizards playoff tickets even more noteworthy is that during the regular season, Wizards tickets were some of the cheapest on the secondary market. The average ticket price for Washington home games was just $56, 23rd-highest in the NBA and second-lowest among the 16 playoff teams; only tickets for the Grizzlies, Timberwolves, Nuggets, Pistons, Bucks, Pelicans and Jazz were cheaper. At $190 per seat, tickets for Game 3 against the Bulls are more than 3x as expensive as an average regular season Wizards home game.

The Bulls, on the other hand, had the 6th-most expensive regular season tickets in the NBA at an average price of $93 on the secondary market, but tickets for Game 3 in DC are considerably more expensive than tickets for Games 1 and 2 in Chicago. The combined average ticket price for those games was $112, making Game 3 at the Verizon Center 70% more expensive on average. Game 1 drew an average ticket price of $120 on the secondary market, and following the Bulls’ loss in that opening game, the average price for Game 2 dipped 17% from $104 to $86 per ticket.