Jorge Posada and Andy Pettitte are retiring their jerseys this weekend at Yankee stadium. With an average resale price of $87 for Saturday’s Posada retirement, and $96 for Pettitte’s retirement, the two games are the seventh and ninth most expensive Yankee home games this season, only trailing match-ups with the Red Sox, Mets and the season opener against the Blue Jays.

The Yankees also retired Bernie Williams’ number earlier this season, on May 24. Tickets to that game resold for an average of $58, far below the numbers we are currently seeing for Posada and Pettitte. However, five days out from that game the average resale price was $73, showing that there was also a late drop in resale prices. For comparison, the average resale price to the Red Sox game where they retired Pedro Martinez’s jersey last month was $79. 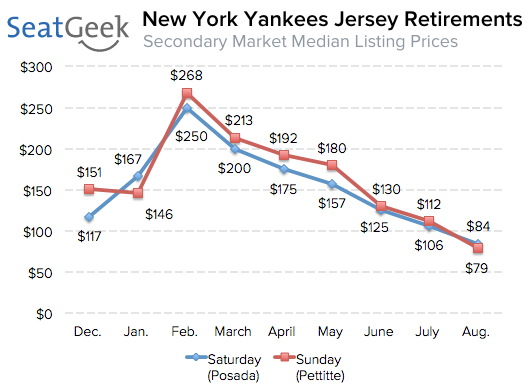 How to Get New York Yankees Playoff Tickets

A Brief History of the Red Sox-Yankees Rivalry

5 Tips: How To Get Cheap New York Yankees Tickets

How the MLB Season Looks After the First Two Weeks

A Brief History of the Little League World Series

The 10 Greatest Rivalries in Sports

Ticket Prices Up for Jeter’s Last Trip to St. Louis