As the College Football Playoff looms closer and closer, and as the SEC enters its last three weeks of a vicious round-robin schedule that’s eliminating potential bracket members, the margin for error is getting slimmer. The Alabama Crimson Tide is still on the outside looking in after TCU jumped them this weekend, but the team still has to be thankful they have any case at all to contend for the title. With a minute to go in last week’s game at LSU, Bama stood to take its second loss of the year and be all but eliminated from the playoff discussion. A last second tying score and a TD in overtime showed the team’s fortitude; they’ll need plenty more of that this weekend when the No. 1 Mississippi State Bulldogs come to Tuscaloosa.

MSU and Heisman-contending QB Dak Prescott weren’t on many people’s radars to contend in the SEC this season, let alone to rise to the No. 1 ranking in the country as early as Week 8 this season. The Bulldogs aren’t as noted for their defense as rival Ole Miss or as star-studded on offense as a team like No. 3 Oregon, but Mississippi State has taken on all challengers in the SEC this season and found a way to win. This is one of two tough SEC West road games left on their schedule, the last two big hurdles standing between them and a Cinderella appearance in the inaugural playoff. All of that potential has stoked the fire of this particular interstate rivalry to new highs, and the secondary ticket market has heated up in the last month.

Fans are paying an average of $275 on the secondary market for a ticket to Saturday’s game at Bryant-Denny Stadium, making it the most in-demand game of the weekend in college football. Ticket prices for this game have more than doubled since the first weekend of the season, when seats were reselling for $127 on average with some available for as little as $87 each. Over just the past month, the average ticket price has jumped 60% from $172 on Saturday, October 11, the day Mississippi State beat Auburn, to $275 today. 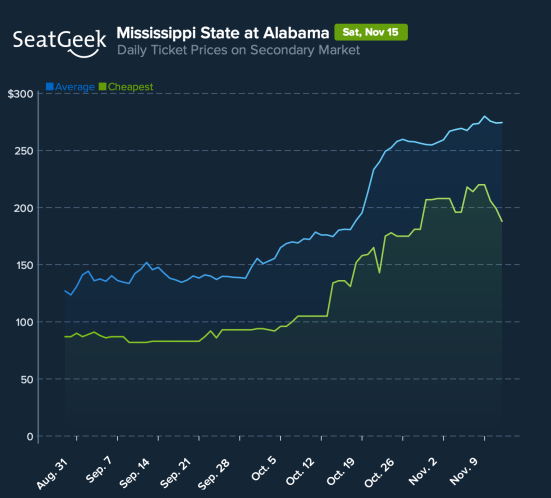 The cheapest available ticket for Mississippi State at Alabama is currently listed for $174, which is also the steepest get-in price for any game in the country this Saturday. Here’s a breakdown of the average ticket price (and get-in price) for the top games this weekend: Mississippi State at Alabama is $275 ($174), Auburn at Georgia‘s currently $266 ($137) and Florida State at Miami is third with $173 ($113). Rounding out the highest five games are Missouri at Texas A&M with an average of $134 ($76) and fifth-ranked Nebraska at Wisconsin, with $124 ($81).

In comparison to previous Alabama home games against Mississippi State, prices are up more than $100 on average. The 2012 Mississippi State game in Tuscaloosa drew an average ticket price of $166, and tickets to the 2010 game went for $135 apiece. The single-game face value of tickets for the Mississippi State game was set at $75, or less than half the price of the cheapest available ticket on the secondary market today.